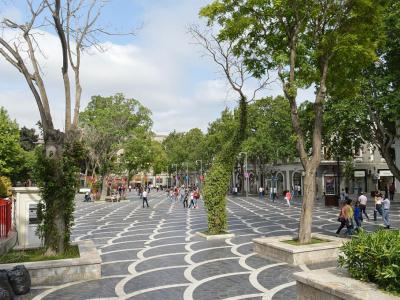 Fountains Square is a square in the central part of downtown Baku. It is named after the many fountains that populate the area. It stretches from Istiglaliyyat Street to Nizami Street along the walls of Icheri Sheher.

The square often hosts community events and celebrations. However, Fountains Square is mostly known as a casual gathering place for both locals and visitors. The square itself offers an artistic, mosaic style walkway, numerous shade trees, a carousel and many fountains. There is also ample room to sit on benches located both in sunny spots and under the shade.

Public art is located throughout the square. Visitors will also find numerous boutiques, shops and eating areas. Both restaurants and food carts are open throughout the day and into the evening.

The square was formerly called Parapet, which is still the name most of the locals use when describing the location. The name was changed to Fountains Square in 2010 after its renovation.
Image Courtesy of Wikimedia and Rodrigo.Argenton.

The city of Baku is an architectural marvel that delights with its historic buildings, grand mansions and cultural diversity. The Old City, for example, is full of fantastic old mosques and palaces that are listed as heritage monuments by UNESCO. The city is especially beautiful at night when it is wonderfully illuminated. Follow this self-guided walking tour to see the most impressive...  view more

Baku's "Ichari Shahar" [pronounced ee-char-EE sha-HAR], which literally means Inner City, is also often referred to by foreigners as the Old City. This unique architectural preserve differs considerably from other ancient places in Azerbaijan and is replete with fascinating architectural monuments. The most prominent of them are the 12th-century, 97-foot Maiden Tower (the most...  view more

Baku is the capital city of Azerbaijan. It is also the country's largest city with about 25 percent of the nation's population located here.

A city existed on the site of Baku since at least the 5th century ADE. The city at that time was called Bagavan. The first record of its modern name appeared in 938 when it was called Bakuh. The city was a domain of the Arab Caliphate, followed...  view more