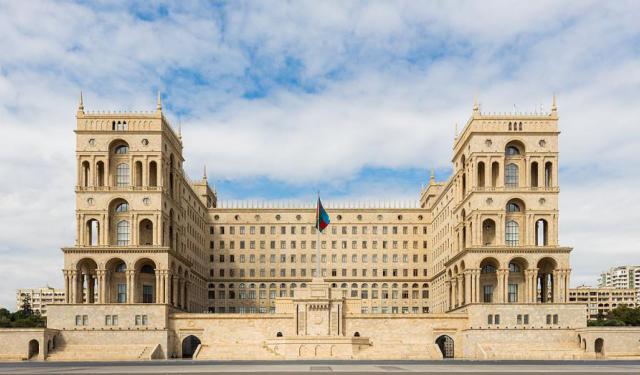 The city of Baku is an architectural marvel that delights with its historic buildings, grand mansions and cultural diversity. The Old City, for example, is full of fantastic old mosques and palaces that are listed as heritage monuments by UNESCO. The city is especially beautiful at night when it is wonderfully illuminated. Take our tour to see the most impressive architectural sights in Baku.
How it works: Download the app "GPSmyCity: Walks in 1K+ Cities" from iTunes App Store or Google Play to your mobile phone or tablet. The app turns your mobile device into a personal tour guide and its built-in GPS navigation functions guide you from one tour stop to next. The app works offline, so no data plan is needed when traveling abroad.

Interior of the mosque has an area of 1400 square meters and decorated with ornaments of painting schools of Azerbaijan plus with samples from eastern ornaments. The height of the dome and a half meters. The mihrab and dome of the mosque made of marble, while decorative elements of the mosque, the tops of minarets and labels are made of gold.

Image by Ismail Valiyev on Wikimedia under Creative Commons License.
Sight description based on wikipedia
2

The Mukhtarov's Mansion is located in the centre of Istiglaliyyat Avenue (Independence Avenue). Built in the early 1910s by Azerbaijan oil millionaire Murtuza Mukhtarov, it was inspired by the magnate’s travels to Venice. Notable architected Jozef Ploshko designed this French Gothic edifice among a number of great buildings in the city.
Image by Grandmaster on Wikimedia under Creative Commons License.
3

The society was originally organized as a club for the wealthy of Baku, who attended it for banquets and entertainment. On 11 August 1937 after the building underwent renovation it was named after composer Muslim Magomayev. In 1936, the club was reorganized into a residence for the Philharmonic society aimed at promoting Azerbaijani classical and folk music. The opening of the fully renovated building took place on 27 January 2004. The main building consists of the Summer Hall (1100 seats) and the Winter Hall (610 seats) joined by a single stage.
Image by Galandar on Wikimedia under Creative Commons License.
Sight description based on wikipedia
4

4) Academy of Sciences (must see)

Azerbaijan National Academy of Sciences, located in Baku, is the main state research organization in Azerbaijan. It was established in 1935.

The Academy was based on the Azerbaijan Society for Scientific Research and Studies, which was first affiliated with Baku State University and later with the USSR Academy of Sciences. In 1945, the USSR Council of People's Commissars ordered the society to be reorganized into the Academy of Sciences of the Azerbaijan SSR. During its first year, the Academy numbered 15 members; Uzeyir Hajibeyov and Samad Vurgun among them. The Presidium is currently located in the historical Ismailiyya building on Istiglaliyyat Street in the center of Baku.
Image by Alakbaroff on Wikimedia under Creative Commons License.
Sight description based on wikipedia
5

Palace of the Shirvanshahs is the biggest monument of the Shirvan-Absheron branch of the Azerbaijan architecture, situated in the Inner City of Baku. The complex contains the main building of the palace, Divanhane, the burial-vaults, the shah's mosque with a minaret, Seyid Yahya Bakuvi's mausoleum, a portal in the east - Murad's gate, a reservoir and the remnants of the bath-house.

The main building of the complex was started in 1411 by Shirvanshah Sheykh Ibrahim I. The two-storey building of the palace numbers about 50 different dimensions and outlines of the constructions connected with 3 narrow winding staircases.

Divankhana is a small stone pavilion. It is situated inside a small courtyard surrounded by a gallery-arcade on three sides.

The Mausoleum of the Shirvanshahs is of a rectangular shape and crowned with a hexahedral cupola which is decorated from outside with multi-radial stars.

The Palace Mosque (1430s) is situated in the lower court of the complex. The laconicism of its prismatic volumes, completed with two slightly pointed cupolas, is shaded by a well-proportioned vertical line of the minaret rising above in the north-eastern corner of the building.
Image by Gulustan on Wikimedia under Creative Commons License.
Sight description based on wikipedia
6

This magnificent palace is one of the finest old buildings in all of Baku. It was built at the turn of the 20th Century by Azerbaijani oil magnate and philanthropist Isabey Hajinski. There is an obelisk on the site dedicated to former French president Charles de Gaulle, who stayed at the palace.
Image by Gulustan on Wikimedia under Creative Commons License.
7

The Baku Business Centre is a brand new building located within a national park on the main city boulevard. This three-story modern building features almost 5,000 square metres of floor space for commerce and exhibitions. Its soft outline and arched entryway give this contemporary centre an Islamic flair.
Image by Niyaz Bakılı on Flickr under Creative Commons License.
8

The Government House of Baku, also known as House of Government, is a government building housing various state ministries of Azerbaijan. It is located on Neftchiler Avenue and faces the Baku Boulevard. The rear side of the building faces busy Uzeyir Hajibeyov Street of central Baku. Government House was designed for 5,500 people.

In 1934, the Soviet authorities announced a tender for construction of Baku Soviet Palace (later renamed to Government House). The competition was won by well known architects Lev Rudnev, V.O. Munts and K. Tkachenko. With some alterations to the project, the building of the Government House was built in 1936 — 1952.

The building housed many organizations and business firms after restoration of Azerbaijani independence in 1991. In 2006, the government of Azerbaijan started renovation works of the building and completed the project in 2010.
Image by Gulustan on Wikimedia under Creative Commons License.
Sight description based on wikipedia
9

9) Theatre of Opera and Ballet (must see)

The Akhundov Azerbaijan State Academic Opera and Ballet Theatre has an interesting back story. According to an urban legend, Daniel Mailov admired the voice of Nezhdanova so much he offered to build an opera house in her honor. The renowned soprano was the first person to perform at the new opera house. In 1916, the theatre acquired its first resident opera company before becoming a state theatre in 1920. In 1959, it received the status of an academic theatre. After a mysterious fire in 1985, the theatre was fully restored and reopened in 1987.
Image by Doluca on Wikimedia under Creative Commons License.
Sight description based on wikipedia
10

The Palace named after H. Aliyev is a former Republic Palace that was renamed in 2003. Built in the Soviet period, the building’s architecture is typical of those times. Today it is the largest music venue in all of Azerbaijan. Major public events like presidential inaugurations are also held here. Look out for the beautiful public garden with charming flowerbeds adjacent to the palace.
Image by Gulustan on Wikimedia under Creative Commons License.