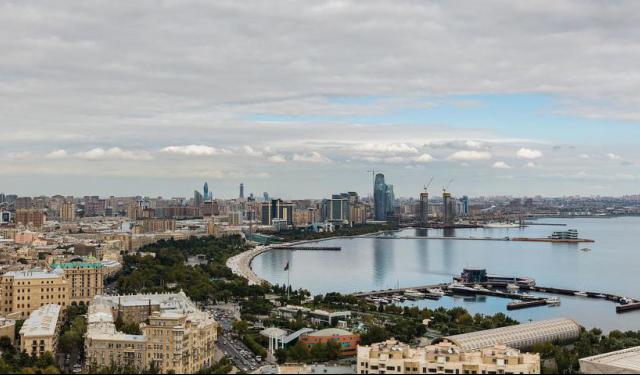 The city of Baku in Azerbaijan attracts thousands of visitors from all over the world each year to see its unique historical and architectural monuments. The Azerbaijani capital is home to dozens of interesting memorials and statues, picturesque squares and dancing musical fountains. Take this walk to see the most alluring attractions in Baku.
How it works: Download the app "GPSmyCity: Walks in 1K+ Cities" from iTunes App Store or Google Play to your mobile phone or tablet. The app turns your mobile device into a personal tour guide and its built-in GPS navigation functions guide you from one tour stop to next. The app works offline, so no data plan is needed when traveling abroad.

Fountains Square (Azerbaijani: Fəvvarələr meydanı) is a public square in downtown Baku. The square was previously called Parapet and is often referenced to by the same name now. The name of the fountains square derives from the presence of dozens of fountains throughout the square first constructed during Soviet rule of Azerbaijan.

The square is a public gathering place, especially after business hours and during the weekend. It is an attractive tourist destination with many boutiques, restaurants, shops, hotels and passage. It starts from the Istiglaliyyat Street and walls of the Icheri Sheher and stretches through Nizami Street, also called in popular culture as the Torgovaya street running parallel to Baku Boulevard. The fountains square is a location where the city authorities hold many public festivals, shows and celebrations.

Image by Jonathan Buser on Flickr under Creative Commons License.
Sight description based on wikipedia
2

Located next to the Nizami Museum of Azerbaijan Literature, this statue is dedicated to the many talented writers the country has produced. Completed by a number of different sculptors, the monument features Muhammad Fizuli, Molla Panah Vagif, Mirza Fatali Akhundov, Hurshidbanu Natavan, Jalil Mamedkulizadeh and Jafar Jabbarli. The building itself, which dates from 1850, represent one of the most attractive examples of city architecture.
Image by Искендеров Рауф on Wikimedia under Creative Commons License.
3

This monument is dedicated to Sabir, which was the pen name of Alakbar Tahirzadeh (1862-1911), a very distinguished Azerbaijani poet, satirist, public figure and professor. Sabir, who began writing at the age of eight, is considered to have single-handedly invented Azerbaijani satire. The monument is located next to Ismayliya Palace. Created in 1958, it is made of bronze, black granite and marble. Sculptor Garyagdy’s imposing work stands nine metres tall.
Image by Samral on Wikimedia under Creative Commons License.
4

4) Academy of Sciences (must see)

Azerbaijan National Academy of Sciences, located in Baku, is the main state research organization in Azerbaijan. It was established in 1935.

The Academy was based on the Azerbaijan Society for Scientific Research and Studies, which was first affiliated with Baku State University and later with the USSR Academy of Sciences. In 1945, the USSR Council of People's Commissars ordered the society to be reorganized into the Academy of Sciences of the Azerbaijan SSR. During its first year, the Academy numbered 15 members; Uzeyir Hajibeyov and Samad Vurgun among them. The Presidium is currently located in the historical Ismailiyya building on Istiglaliyyat Street in the center of Baku.

Image by Alakbaroff on Wikimedia under Creative Commons License.
Sight description based on wikipedia
5

The Mukhtarov's Mansion is located in the centre of Istiglaliyyat Avenue (Independence Avenue). Built in the early 1910s by Azerbaijan oil millionaire Murtuza Mukhtarov, it was inspired by the magnate’s travels to Venice. Notable architected Jozef Ploshko designed this French Gothic edifice among a number of great buildings in the city.
Image by Grandmaster on Wikimedia under Creative Commons License.
6

The Old City is Baku’s historic center, and a UNESCO World Heritage site. The entire area remains surrounded by fortifications dating from the 11th and 12th centuries. Later additions include five gates from the 12th to 19th centuries and a number of cannons added in the 18th Century.
Image by Gulustan on Wikimedia under Creative Commons License.
7

The society was originally organized as a club for the wealthy of Baku, who attended it for banquets and entertainment. On 11 August 1937 after the building underwent renovation it was named after composer Muslim Magomayev. In 1936, the club was reorganized into a residence for the Philharmonic society aimed at promoting Azerbaijani classical and folk music. The opening of the fully renovated building took place on 27 January 2004. The main building consists of the Summer Hall (1100 seats) and the Winter Hall (610 seats) joined by a single stage.

Image by Galandar on Wikimedia under Creative Commons License.
Sight description based on wikipedia
8

The Rustam Mustafayev Azerbaijan State Museum of Art is the country’s largest art museum. Founded in 1936, it got its name from a prominent local painter and theater artist. Spread across two buildings, the museum boasts more than 3,000 exhibits in 60 display rooms. European art and Russian art are the focus of the first building, while the second houses the Eastern art, including Persian, Turkish, Chinese and Japanese works. Azerbaijani artists represented include painters Mir Mohsun Navvab, Bahruz Kangarli, Tair Salakhov, Azim Azimzade, Salam Salamzade, and Vidadi Narimanbekov, as well as sculptor Omar Eldarov. The museum also has easel and book miniatures from the 17th – 19th centuries, lacquered miniatures and a unusual collection of sherbet spoons made from mulberry trees.
Image by Doluca on Wikimedia under Creative Commons License.
Sight description based on wikipedia
9

According to Arabic inscription which was saved in front of doorway of northern wall of the mosque, it was built by ustad-rais Muhammad the son of Abu Bakr in 471 of Hijra. It means that the architect was not only a master-ustad, but also a rais-head of artificers’ corporation.
Image by SibFreak on Wikimedia under Creative Commons License.
Sight description based on wikipedia
10

The Mosque Juma, or Friday Mosque, is a late 19th Century building erected by a local wealthy man. It sits on a site that is thought to have been the location of an ancient temple of fire worshippers. The current mosque stands out both for its cone-shaped dome and colorful ornamented tiles. The minaret which adjoins the mosque has been in place since 1437, and today represents an excellent example of traditional Azerbaijan architecture.
Image by Aleksander Dragnes on Flickr under Creative Commons License.
11

The Lezgi Mosque is one of the oldest mosques – indeed, building of any kind – in the city. Located in Baku’s Old Town district, it stands today as a religious, historical and cultural landmark of Azerbaijan. It is thought to have been built by Najaf Ashour, son of Ibrahim, in around 1169. Then known as Ashour’s mosque, it got its current name in 1920. Today a UNESCO World Cultural Heritage site, it regularly draws worshippers from all over the city.
Image by Самый древний on Wikimedia under Creative Commons License.
12

The Maiden Tower (Azerbaijani: Qız Qalası) or also known locally as Giz Galasi located in the Old City is an ancient tower with cultural affinity corroborating the presence Zoroastrians, Sassanians, Arabs, Persians, Shirvanis, Ottomans, and Russians. Built in the 12th century, as part of the walled city of Baku, the Maiden Tower, with the Shirvanshahs' Palace dated to the 15th century, are an ensemble of historic monuments. It is one of the most noted landmarks and Azerbaijan's most distinctive national emblems, and is thus featured on Azeri currency notes and other official letter heads.

The Maiden Tower houses a museum, which presents the story of historic evolution of the Baku city. It also has a gift shop. The view from the roof takes in the alleys and minarets of the Old City, the Baku Boulevard, the De Gaulle house and a wide vista of the Baku Bay. In recent years, the brazier on the top has been lit during the nights of the Novruz festival.

Consequent to the receding of the sea shore line of the Caspian Sea, a strip of land emerged. This land was developed between the 9th and 15th centuries, when the walls of the old city, the palace including the huge bastion of the Maiden Tower were built.
Image by داود مجتهدی on Wikimedia under Creative Commons License.
Sight description based on wikipedia
13

This magnificent palace is one of the finest old buildings in all of Baku. It was built at the turn of the 20th Century by Azerbaijani oil magnate and philanthropist Isabey Hajinski. There is an obelisk on the site dedicated to former French president Charles de Gaulle, who stayed at the palace.
Image by Gulustan on Wikimedia under Creative Commons License.