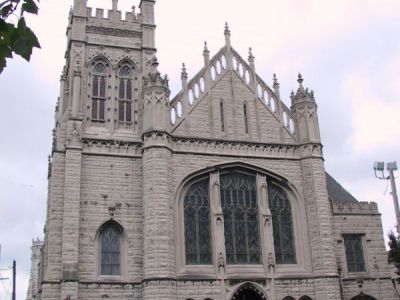 By January 1902, the congregation had grown to 472 members and the present sanctuary was built, featuring new main facade complete with the remains of the old building, dating back to 1888, which were deemed significant as "an exceptional example of Gothic Revival ecclesiastical architecture". In 1922, a Sunday School Annex was added, and the entire church complex underwent major renovation following Louisville's flood of 1937. The newest annex of the church is the Sallie Smyser Chapel erected in 1957.

The sanctuary was added to the National Register of Historic Places in 1979 and is still known throughout Methodism as one of its most beautiful places of worship.
Image Courtesy of Fourth Avenue United Methodist Church.
Sight description based on Wikipedia.