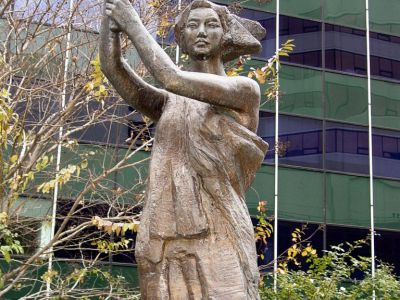 Freedom Park is a two block long elevated linear park in the Rosslyn section of Arlington. It was built on an elevated concrete structure originally constructed for use as an automobile overpass, and as such, rises above and over the surrounding streets.

The park was founded in 1996 as a joint-venture with the Newseum and Freedom Forum Journalists Memorial, both operated by the Freedom Forum, and was dedicated to the spirit of freedom and the struggle to preserve it. In 2008 the Newseum moved to a new location in the District of Columbia, upon which time Monday Properties took over operations of the park, and most of the original exhibits were removed. Today the park is used primarily by residents and workers of Rosslyn as a quiet escape from the busy city below.

This sight is featured in a self-guided walking tour of Arlington, Virginia within the mobile app "GPSmyCity: Walks in 1K+ Cities" which can be downloaded from iTunes App Store or Google Play. Please download the app to your mobile phone or tablet for travel directions for visiting this sight. The app turns your mobile device to a personal tour guide and it works offline, so no data plan is needed when traveling abroad.

Besides its numerous tourist attractions, Arlington has a warm and active daily life, including many sites frequented by locals. Take the following tour to get a glimpse of a typical day in downtown Arlington through the eyes of those who live and work in the city.