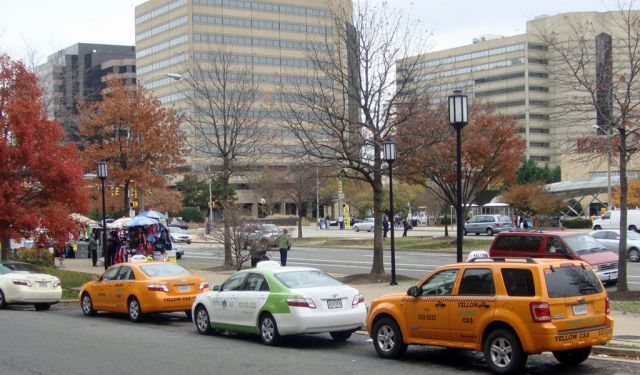 Although many of Arlington’s most popular and accessible attractions can be found downtown, its suburban area contains a unique charm definitely worth checking out. Take the following tour to get a glimpse of the southern part of Arlington overlooking the Potomac River.
Image Courtesy of Wikimedia and Mario Roberto Duran Ortiz.
How it works: Download the app "GPSmyCity: Walks in 1K+ Cities" from iTunes App Store or Google Play to your mobile phone or tablet. The app turns your mobile device into a personal tour guide and its built-in GPS navigation functions guide you from one tour stop to next. The app works offline, so no data plan is needed when traveling abroad.

Mount Olive Baptist Church has come a long way since its foundation in 1873 as Antioch Baptist Church. Throughout this time, it has established a tradition of Christian worship in the city. The building that hosts the present church was built in 1944 and has been home to Mount Olive Baptist for over twenty years now.
Image Courtesy of Wikimedia and Deror avi.
2

The Pentagon Memorial, located just southwest of The Pentagon in Arlington County, is a permanent outdoor memorial to the 184 men and women who lost their lives as victims of the attack, killed both in the building and on American Airlines Flight 77 in the September 11, 2001 attacks.

Designed by Julie Beckman and Keith Kaseman of the architectural firm of Kaseman Beckman Advanced Strategies with engineers Buro Happold, the memorial opened to the public on September 11, 2008. The Pentagon Memorial was constructed from a design by Beckman and Kaseman of Philadelphia, Pennsylvania, with design support from Buro Happold, that was chosen following a design competition.

To honor the 184 victims, 184 illuminated benches have been arranged according to the victim's ages, starting with Dana Falkenberg, 3, to John Yamnicky Sr., 71, in a landscaped 1.93-acre plot. Each bench is engraved with the name of a victim. The benches representing the victims that were inside the Pentagon are arranged so those reading the names will face the Pentagon's south facade, where the plane hit; benches dedicated to victims aboard the plane are arranged so that those reading the engraved name will be facing skyward along the path the plane traveled. The National Park Service anticipated the memorial would attract more than 2 million visitors per year.

Image Courtesy of Wikimedia and Brien Aho.
Sight description based on Wikipedia.
3

Pentagon Row is a shopping, entertainment, dining and nightlife area that is quite famous in the southern part of Arlington. Featuring a number of specialty shops, restaurants and bars to spend your evening, during the winter an outdoor ice skating rink is available, and during the summer you can enjoy Concert Nights and other events hosted here.
Image Courtesy of Wikimedia and AudeVivere.
4

Virginia Highlands Park, a popular attraction in this part of Arlington, features facilities for tennis, basketball and baseball, many attractions for children, picnic areas, grills and a gazebo. A wonderful place for leisure and recreation, on the grounds you will also find two beautiful fountains.
Image Courtesy of Flickr and Jacob and Karen Rank.
5

Mystery Dinner Playhouse, a popular dinner theater unique in its style and service, is located at the Sheraton Crystal City Hotel. Besides enjoying an evening with delicious food, including four courses, guests can participate in solving a crime mystery. Characters interact with the audience during the meal, providing clues to solve the crime. Sure to be a fun visit, it is open Friday and Saturdays at 7:30 pm, and on Sunday at 6:30 pm.
Image Courtesy of Wikimedia and Jeremy Keith.