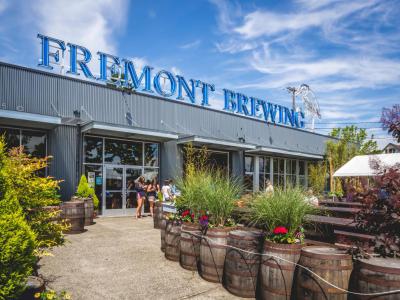 This place has some great beers, especially for when you want to drink something local. It's a true northwest-style of brewing with lots of different and inventive options, and everything from the environment to the wide beer selection in their new, expanded space is absolutely perfect.

To start with, the location is great! There's plenty of space, both indoors and outdoors, and some board game options for those looking for a diversion with their drink. The true gem is, of course, the Urban Beer Garden, which has plenty of tables and benches to sit – whether in the sun or in the shade. It's also really nice that the large trees/plants surrounding the area add some privacy from the people walking on the sidewalk outside the brewery.

The beers are a win-win here, especially if you like them hoppy! Even those who are not huge fans of IPA, which Fremont Brewing has a fair share of, should give one a try. They also have other styles, like barrel-aged stouts on nitro (e.g., 'Coconut Imperial Stout', 'Cinnamon Coffee Imperial Stout'), lager, and so forth. It is always nice to be at a place that has good options for people with very different palettes. A flight comes with five samplers, so taste it up!