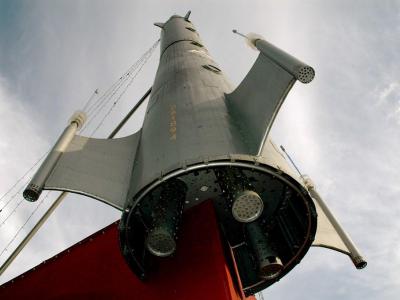 Not far from the giant and controversial statue of Lenin is this more neutral piece of culture and character in the Fremont neighborhood – a rocket. Rising fifty-some odd feet into the air and nonchalantly strapped to the side of a store, it is easily spotted from adjoining streets and impossible to miss. If you take a closer look, it bears Fremont's coat of arms and motto "De Libertas Quirkas" (or "Freedom to Be Peculiar"), which is quite a deviation from its original intended use in the Cold War.

If you're a first-time viewer, be sure to read the brief history on the plaque to the right. The rocket was otherwise called "phallic and zany-looking" by Lonely Planet, which said the neighborhood has adopted it as a "community totem". Surprisingly, such totem is not made of any rocket or missile parts, but rather from a military surplus tail boom originally part of a Fairchild C-119 'Flying Boxcar' transport aircraft. Nevertheless, the 1920s streamlined Art Deco sci-fi space rocket appearance, adorned with "neon laser pods" in the style of ray-guns, makes it an interesting sight to see during the day but also at night, when multi-colored lights give it a very cosmic glow. If only they would let you go in it!!
Image Courtesy of Flickr and ngader.