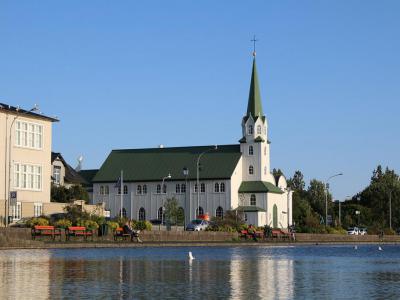 The Fríkirkjan Church, also known as Free Church in Reykjavik, is a church which is apart from the State Church. It is an independent Lutheran Free Church of Iceland. It lies in the center of the Icelandic capital, by the lake Tjornin.

The church congregation was established in Reykjavík in the autumn of 1899. It had an initial membership of 600 which soon rose. The rising population of Reykjavík and the concomitant social changes also contributed to its growth.

Shortly after the new congregation was founded, a suitable site for a new church was chosen at the east of the lake. The church was consecrated on 22 February 1903. Only two years later the church was lengthened, to a design by architect Rögnvaldur Ólafsson. In 1924 the church was enlarged again. A chancel was built of concrete at the eastern end, and various alterations were built on either side of the forechurch, supervised by master builder Guðmundur H. Þorláksson.
Image by TommyBee on Wikimedia under Creative Commons License.
Sight description based on wikipedia