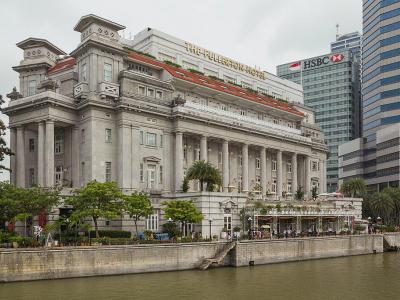 The Fullerton Hotel Singapore is a historic hotel set at the mouth of the Singapore River amid the financial and arts district, within a walking distance to the National Gallery and minutes away from the city's main shopping belt. For nearly a century this building has overlooked Fullerton Square, an important commerce area and the core of major local business activity which played a pivotal role in Singapore’s rich history. Originally known as the Fullerton Building, it had among founding tenants the General Post Office, The Exchange, Singapore Club (now Singapore Town Club), the Marine Department, and the Import and Export Department (later the Ministry of Trade and Industry). The building was named after Robert Fullerton, the first Governor of the Straits Settlements (1826–1829), and was meant to display the authority and might of the British Colonial rule with the befitting grandeur and class.

Opened on 27 June 1928, it was the biggest structure in Singapore at the time. Designed to utilize natural ventilation, it had four internal air-wells to cool the interiors. At some point, there was also a lighthouse placed on top of it, called the Fullerton Light, built to replace the Fort Canning Light decommissioned in 1979 for being gradually blocked by high-rising construction in Singapore.

In the course of the 1998-2000 restoration project, the Fullerton was transformed into a stunning 400-room heritage hotel. During its redevelopment, this grand Neo-Classical landmark had most of its special architectural features retained. Among them the General Post Office gallery area on the ground floor with bays that corresponded with the building's towering two-story fluted Doric colonnades on the facade and high-ceiling verandas, the lofty portico over the main entrance with trophy designs and the Royal Coat of Arms, as well as the Straits Club Billiard Room – kept but without original wood paneling. The Shanghai plaster panels adorning the exterior have been restored as well. As for the lighthouse, it has been converted to the Lighthouse Restaurant to keep in line with the modern style of the hotel.

In December 2015 the Fullerton Hotel was gazetted as Singapore's 71st National Monument.
Image by Marcin Konsek on Wikimedia under Creative Commons License.
Sight description based on wikipedia