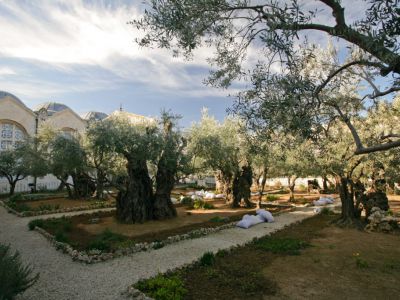 Garden of Gethsemane, Jerusalem (must see)

A place of great resonance in Christianity, this beautiful walled garden at the bottom of the Mount of Olives, revered since the apostolic period, is the site where – according to the four Gospels of the New Testament – Jesus experienced the agonizing premonition of his passion and death, and where he was arrested the night before his crucifixion. The name is Aramaic for "oil press" and most certainly refers to the fact that the area was once used to press olive oil.

Beyond the religious significance, the garden is essentially an urban olive orchard, with eight distinctive ancient trees among others. Carbon dating estimates the eight trees to be over 900 years old (as such, amongst the oldest known to science), having descended from the same parent tree – possibly itself a descendant from the original trees of Christ's time. They still produce fruit but are fenced off so unless you gracefully tip the gatekeeper, you can't go walking among them.

Also be sure to visit the adjacent Church of All Nations, also known as the Basilica of the Agony, which holds inside a section of bedrock where Jesus is said to have prayed before his arrest. It was built in 1924 with funds contributed by twelve nations, hence the name and the twelve domes bearing national coats of arms. Silence is enforced, so it's usually quite peaceful.

Tip:
Make very sure your knees, shoulders and upper arms are properly covered, preferably with clothing and not just a shawl, or you will be refused entry. Women should definitely avoid shorts of any length.