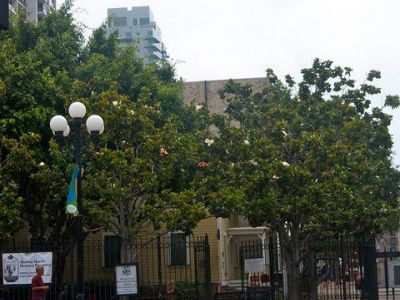 The tour of the Gaslamp Museum at the Davis-Horton House covers two floors of the grand historic home where the concept for the "New San Diego" began. Touring the location takes ~30 to 60 minutes, but in that time you can see exhibits that retell the story of the downtown area's early settlers and get a glimpse of what the dream was to be for San Diego.

Looking at the 1st-floor parlor and seeing the small keyboard against the wall speaks of the paucity of entertainment and how families made do with what they had. Life was so much simpler in the 1850s – but then, with gas lamps and no electricity, the household pretty much got up with the rising sun and retired with its setting.

The distillery upstairs – whose intended purpose was to circumvent prohibition regulations – is an intricate affair, with quite an elaborate system which presumably was highly effective. One may also have a sneak peek of the attic access where a German WWII spy allegedly sent signals (carrying logistical information) to the off-shore submarines.

The saltbox-style house had been a Civil War (Union side) headquarters in its early past, as well as a hospital (1873) with five beds upstairs; the then-owner had a county contract for $1 a patient (daily) and treated TB cases mostly. The bathroom and kitchen always tell such interesting stories about how these centers of the home's most important functions were utilized.

Outside, the shady little courtyard pays tribute to famous dogs recognized for their role in the community (they were loved for sure), and there is also a lower-level gift shop that will allow a chance to enjoy some unique souvenirs.

Tip:
Entry price varies by whether an audio guide is requested and includes admission to the Chinese Historical Museum nearby.