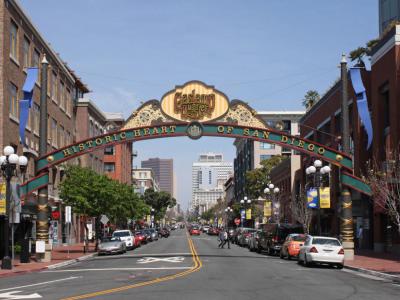 Officially completed and dedicated in 1989, this archway was symbolic as a declaration that the City of San Diego was committed to continuing the redevelopment of Downtown, while also serving as an icon for other cities to look to the Gaslamp Quarter as an example of successful redevelopment. With a total weight of six tons, the archway uses neon, incandescent and fluorescent light fixtures to present a beautiful, vibrant night-time display.

Despite being on the entryway arch and all official city signage/banners, "Gaslamp Quarter" is rarely used by locals; in fact, the use of "Gaslamp District" is so pervasive by locals that it has become a shibboleth to determine who is a San Diegan and who is a tourist. Upon first visit here, you'll see many of the big city downtown things. The feeling itself with all of the people and lights, resembles a walk down the Vegas Strip (though, admittedly, nothing will compare to the actual Strip).
Image Courtesy of Wikimedia and Bernard Gagnon.