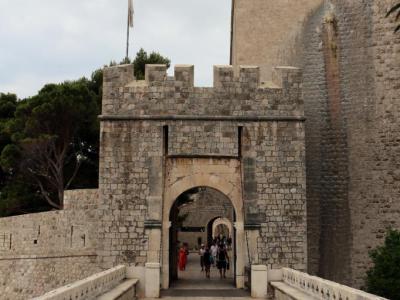 On the eastern side of the land walls of Dubrovnik stands the second major entrance to the city, the Gate of Ploče. This Romanesque style gate consists of inner and outer section and is protected by the freestanding Revelin Fortress, which are connected by a wooden drawbridge and a twin-spanned stone bridge spanning a protective ditch. The Outer Gate of Ploče was designed and constructed by architect Mihajlo Hranjac in 1628, while the two bridges to the Revelin Fortress were built in the 15th century by Paskoje Miličević. The latter also designed the Pile Gate bridges, which explains their similarities. Presiding over the Ploče Gate, just like the Gate of Pile, is the statue of Saint Blaise, the patron saint of Dubrovnik.

*** Game of Thrones Tour ***
The Ploče Gate appeared in Season 2 and Season 5 of the Game of Thrones series. In Season 2, Episode 5, ‘The Ghost of Harrenhal’ it shows in the background as Tyrion and Lancel Lannister talk with Bronn. In Season 5, Episode 10 ‘Mother’s Mercy’, Cercsei passes over the stone bridge, entering the Red Keep through the Ploče Gate after completing her Walk of Shame, and is greeted by Qyburn.
Image Courtesy of Wikimedia and Sailko.
Sight description based on Wikipedia.