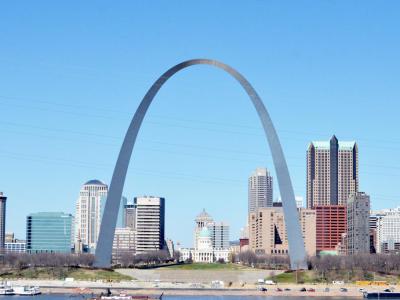 The Gateway Arch is an arch that is the centerpiece of the Jefferson National Expansion Memorial in St. Louis. It was built as a monument to the westward expansion of the United States. At 630 feet, it is the tallest man-made monument in the United States. The arch is located at the site of St. Louis' foundation, on the west bank of the Mississippi River.

The Gateway Arch was designed by Finnish-American architect Eero Saarinen and German-American structural engineer Hannskarl Bandel in 1947. The arch typifies "the pioneer spirit of the men and women who won the West, and those of a latter-day to strive on other frontiers." The arch has become the iconic image of St. Louis, appearing in many parts of city culture. Both the width and height of the arch are 630 feet. The structure weighs 42,878 short tons.

Why You Should Visit:
THE iconic thing to see in St. Louis, even with the inevitable controversy surrounding it. The grounds are lovely: tree-lined walking paths with historical markers to help one appreciate the history of this world-renowned waterfront. Very quirky lift mechanism to get to the top, but great views when you get there.

Tip:
Go early to walk to the (free) small museum prior to the tram car up.