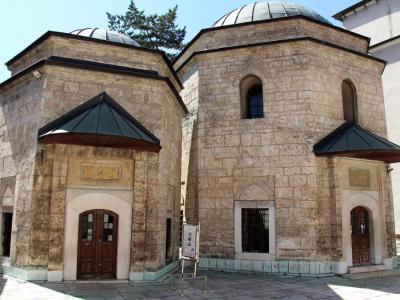 The Gazi Husrev-bey Mosque is a mosque in the city of Sarajevo. It is considered the most important Islamic structure in the country and one of the world's finest examples of Ottoman architecture. It is located in the Baščaršija neighborhood in the Stari Grad municipality, and remains one of the most popular centers of worship in the city.

The Gazi Husrev-beg Mosque was built by the famous Ottoman architect Adzem Esir Ali "Alaüddin", who also built the Yavuz Selim Mosque in Istanbul for the Sultan Selim I. The mosque was financed in 1531 by Gazi Husrev-beg, the provincial governor of Bosnia and Sultan Beyazid II's grandson. Gazi Husrev-beg is widely considered Sarajevo's greatest patron, as he financed much of Sarajevo's old city at this time. Magnificent stalactite ornamentation in the angles under the dome and in the place where the imam leads the prayers, as well as other polychromatic decoration, valuable carpets and the light effects through the 51 windows produces a sense of greater space than there is in reality. At every time of prayer in this mosque, the great benefactor Gazi Husrev-beg is remembered.

During the Siege of Sarajevo, Serbian forces purposely targeted many centers of the city's culture, such as museums, libraries, and mosques, and fired on them generally. As the largest and best known, the Beg's mosque was an obvious target. Heavily damaged in the war, it was renovated in 1996 with foreign help. Haverford College Professor Michael A. Sells has accused the renovators of Wahhabism in the mosque. Prior to reconstruction, the interior was far more intricate, but today the walls are simply white, much of the detail, artistry, and color taken out. Complete restoration and re-painting of the mosque began in 2000. It has been done mainly by Hazim Numanagić, a Bosnian calligrapher.
Image by Brenda Annerl on Wikimedia under Creative Commons License.
Sight description based on wikipedia

This sight is featured in a self-guided walking tour of Sarajevo, Bosnia-Herzegovina within the mobile app "GPSmyCity: Walks in 1K+ Cities" which can be downloaded from iTunes App Store or Google Play. Please download the app to your mobile phone or tablet for travel directions for visiting this sight. The app turns your mobile device to a personal tour guide and it works offline, so no data plan is needed when traveling abroad.