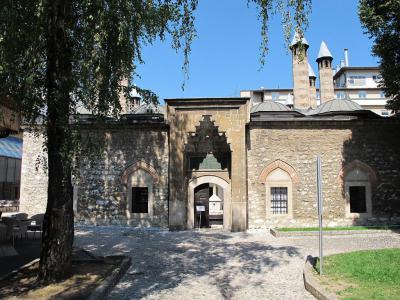 At the Gazi Husrev-beg madrasa classes were attended and the teaching methods and schedules were traditional, modeled on other madrasas of large cities throughout the Empire.

In his will (waqf name), Gazi Husrev-beg appointed a professor (muderis) and his madrasa to be a learned man (alim), who would teach the interpretation of the Qur'an (tefsir), oral tradition (hadit), legal philosophy and its topics, such as sharia law (ahkam) and Islamic Islamic jurisprudence (fiqh), sharia law institutions. (usul), philosophy and its topics, such as poetics and rhetoric concerning semantic syntax, and allegorical and non-allegorical significations, linguistic allusion and linguistic signalling (al-Maānī wa 'l-Bayān), metaphysical dogmatics (kalam), "and of other sciences, those that require habit and time".

The education lasted between 12 and 16 years, the students were not divided into classes but into rings (circles, groups), and at the end of school they received a diploma (ijazah).

Today, the Gazi Husrev-beg Madrasa acts as a high school and college. The training lasts for four years. Classes are conducted in Bosnian according to the Curriculum adopted by the Islamic Community in Bosnia and Herzegovina (Riyaset), and approved by the Ministry of Education and Science of Sarajevo Canton. Students who have completed this high school can continue their education at any faculty in Bosnia and Herzegovina and at many faculties abroad.

The madrasa is a boarding school and all regular students live there. This, in addition to regular classes, allows them a variety of extracurricular activities through different sections, clubs and circles. The choir section, which has a dozen recorded audio and video features with Islamic religious songs glorifying Allah (ilahija) and songs about famous people from the Islamic milieu (kasida).
Image Courtesy of Wikimedia and Mattan.
Sight description based on Wikipedia.