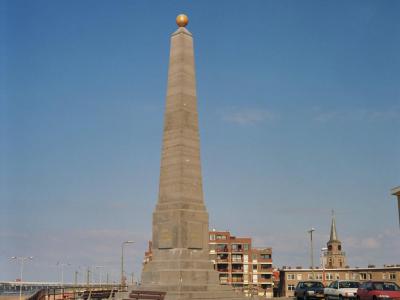 The initiative to erect a monument was taken in 1863 by King Willem III . His uncle Prince Frederik became chairman of a committee set up by the king to devise a national memorial dedicated to the restoration of Dutch independence.

The commemorative needle was unveiled on 24 August 1865, the birthday of King Willem I. Prince Frederik gave a speech and alderman mr H. Baron Collot d'Escury , acting mayor, subsequently received the monument on behalf of the municipality. The ceremony was also attended by Queen Sophia , Crown Prince William , Prince Alexander and Prince Hendrik.

The monument is a national monument . It was designed by architect Arend Roodenburg and made by stonemasons PJ Devillers & Co. In 2003 the monument was restored.

In 1863 , in commemoration of the above landing , William III laid the foundation stone for the foundation of the Plein 1813. It was unveiled by Prince Frederik six years later.
Image Courtesy of Wikimedia and Loek Tangel.
Sight description based on Wikipedia.