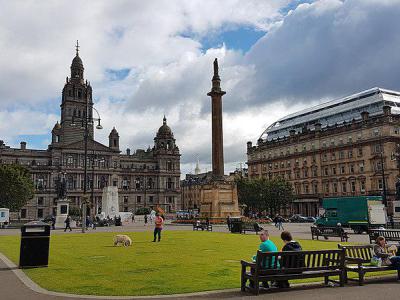 When you see George Square today, it is hard to believe that at its origins it was a hollow filled with filthy, stagnant water and its marshy edges were used as a slaughterhouse. Between 1787-1829 the area was drained, opened out and lined with houses on the east and west sides.

Named after King George III, the square became the center of merchant activity with the Merchants House customs and exchange building constructed in 1850. No statue of King George is placed here, although one was intended to be. Unfortunately, because of Britain’s defeat in the American War of Independence, which caused so much anguish for Glasgow’s Tobacco Lords and the king’s later mental illness, the 24-meter column in the square’s center is topped by Sir Walter Scott instead.

Other statues and monuments abound on the square, including the Cenotaph by Burnett raised to the memory of Glaswegian soldiers killed in the First World War. There are rare equestrian statues representing Queen Victoria and Prince Albert, figures of Robert Burns, James Watt, Thomas Graham, William Gladstone, Robert Peel and James Oswald.

If you are lucky to be in Glasgow during the winter, you can enjoy the ice-skating rink that is set up there and buy your presents in the enormous Christmas Market.
Image Courtesy of Wikimedia and Stinglehammer.