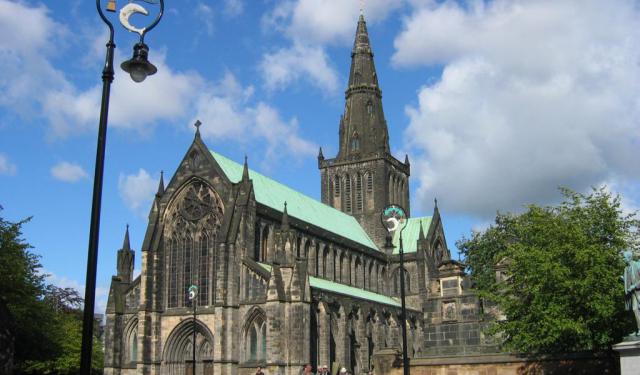 The feeling of serenity, of being free from stress and worries is very precious nowadays. And where better to find this than inside a church. Glasgow is home to a number of great churches that are notable for their architectural design, mostly in a Gothic style. Take our Places of Worship tour to visit the best churches in the city.
Image Courtesy of Wikimedia and Michael Hanselmann.
How it works: Download the app "GPSmyCity: Walks in 1K+ Cities" from iTunes App Store or Google Play to your mobile phone or tablet. The app turns your mobile device into a personal tour guide and its built-in GPS navigation functions guide you from one tour stop to next. The app works offline, so no data plan is needed when traveling abroad.

St Mungo's Cathedral, or simply Glasgow Cathedral, is one of the few churches to have survived the Reformation. The setting for numerous literary works over the ages, its ornate construction and rich history dating from the 12th century provide hours of learning and exploration.

The ground on which the cathedral stands is steeped in history; it was first blessed by Saint Ninian over 1600 years ago and St Mungo, the son of a pagan King of Lothian, built his church here in the 7th century. You can see his tomb under the main altar, in the crypt.

The original church was wooden and was mostly destroyed by fire. Building began on the “new” church during the 12th century, in the Gothic style. It once had towers at its west end, but these were removed during renovations in the 18th century since there wasn’t enough money to replace them.

Inside the cathedral, you can admire the ancient “rood screen”, an ornate partition between the chancel and the nave. Rood screens are rare in Scottish churches and this one is much prized. In 1999 the magnificent Millennium Window was installed in the north wall of the nave. There are several side chapels, including the Chapel of St John the Baptist where you can see St Mungo’s Well.

During the Reformation, when many churches were sacked and torn down, the people of Glasgow took up arms to defend the cathedral. In 1583 the Town Council agreed to oversee the building and pay for its upkeep. It stands today as a reminder of the devotion and determination of the people who worship in it.

Tip:
Admission is free, and it's highly recommended that you visit the interior. After that, go next door to the Museum of Religious Life and Art, across the road to Provand's Lordship, and up the hill to the Necropolis (to get beautiful views of the Cathedral and the city), and you'll see the original medieval heart of Glasgow, and experience attractions for free in one day.

At the busy end of Buchannan Street is Nelson Mandela Place and you will find here the St George’s Tron Church which is the oldest building on the square.

The original church was built in 1687 but soon became too small for the parish’s growing population. Today’s church was built in 1808 by William Stark in the Baroque style. When the building was completed there were statues of Mathew, Mark, Luke and John on top of the bell tower, but these have been replaced by the impressive obelisk that stands over the ribbed dome and clock tower.

Between the time of its construction and 1940 the church was called St George’s Parish Church, but then it merged with Tron St Anne and took its present name.

The interior of the church is modern and light with arched lead-panelled windows and soft fixed lighting in the flat ceiling. The interior is plain and decoration is minimal, with its semicircular gallery overlooking the main aisle and altar.

It is truly a place of worship, although visitors are welcome to take part in the interesting services. The church has a book shop that sells Christian books and magazines and religious items, such as silver jewellery and postcards. Several times a week events are held in the church, including music concerts at lunchtimes.
Image Courtesy of Wikimedia and Finlay McWalter.
3

Don’t be put off by the rather forbidding exterior of St Aloysius’ Church on Rose Street, or you’ll miss visiting one of the loveliest churches in Glasgow.

The church was built in 1908 in the 17th century Renaissance style by Menart, with a slender golden-domed campanile, Baroque façade and Byzantine dome. The interior is modelled on the Cathedral of Namur in Belgium.

The church is 46 metres long and 28 metres wide with a 14 metre barrel roof of reinforced concrete spanning the nave. The ceiling height is 18.6 metres and 21.50 metres under the main cupola, which is beautifully decorated in green and gold and has 8 stained-glass windows. The interior is sheathed in marble decorated with Venetian mosaics. The High Altar was added in 1913. There are two sacristies and guildhalls.

The church boasts four lovely side chapels, with the Lady Chapel on the right of the High Altar where you can see a marble statue of Our Lady on a pedestal and a stained-glass window of the Annunciation.

The other chapels are: The Sacred Hearts Chapel, the Holy Souls Chapel and the St Ignatius Chapel. There is a shrine to St John Ogilvie, the first Jesuit martyr, and a copy of the statue Our Lady of Montserrat (the Black Madonna), which was donated to the church by Spanish visitors in 2008.
Image Courtesy of Wikimedia and David Dixon.
4

St Mary the Virgin Cathedral is a beautiful church situated on the Great Western Road, where its tall spire dominates the skyline.

The church was built in 1893 by George Scott in a 14th century Gothic design. The spire was designed by John Scott. It is 23m high and stands on top of the 40 meter-high tower. The bell tower houses a ten bell peal of bells. The church is built of Lanark stone

The nave is 31m long and 9m wide and is separated from the aisles on each side by arcades comprising 6 arches. The nave’s glazed porch was added during renovations between 1998 and 2002.

The chancel and the transepts are separated from the nave by arches supported by columns of white Bath Stone. The Ashlar pulpit rests on colonnades of polished granite. During renovations the chancel, the Crossing and the tower were given a new roof and the organ was completely rebuilt. The clerestory windows were changed, the stained glass is by Hardman and Company.

The cathedral is very popular and has a full, professional choir. Other than the interesting services, it attracts tourists by hosting concerts, music recitals, art exhibitions and other events.
Image Courtesy of Wikimedia and Finlay McWalter.
Sight description based on Wikipedia.
5

You will find Woodlands Methodist Church on Woodlands Road and you will discover that it is a lovely church to visit.

The church was commissioned in 1909 by the Swedenborgians, who created a New Church movement in 1787 based on the writings of Emanuel Swedenborg, an 18th century philosopher and Christian “mystic”, who believed that the Last Judgement had taken place in the spirit world in 1757.

The church was built by David Barclay on two storeys with a Gothic gabled roof and a corner tower on the north side. It became a Methodist church in 1977.

The ground floor of the church is given over to offices and the High Nave is on the 1st floor, reached by Gothic, carved steps with a glass canopy. One of the stained glass windows is a memorial panel for those who died during the Second World War. On the east wall, above the fireplace, you will see carved panels representing the Swedish flag and the salmon and oak symbols of Glasgow.

The doors’ lintels are decorated with biblical inscriptions and stone columns support the wood panelled Chancel’s semicircular arch and the transept’s pointed arches. The church library at the rear of the building has wood panelling and Gothic-like bookcases on all of its walls.
Image Courtesy of Wikimedia and BertieB.