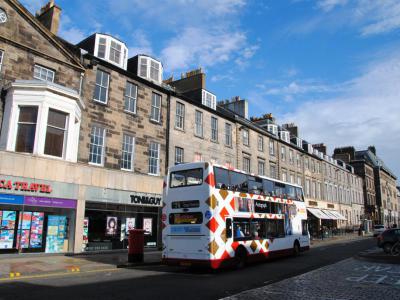 George Street is the central thoroughfare of the First New Town of Edinburgh, planned in the 18th century by James Craig. The street takes its name from King George III and connects St Andrew Square in the east to Charlotte Square in the west.

Initially, back in 1767, the street was designed as a residential area. However, during the Victorian period all the homes were replaced by shops, showrooms, banks, small department stores and hotels. A good number of the grander buildings here were designed by prominent Victorian architect, David Bryce, who lived in this street himself.

In the 21st century, George Street remains essentially a Victorian townscape, but the use of many of its commercial buildings has changed to accommodate restaurants, coffee shops and bars, as well as many high-end clothing boutiques.
Image by Leandro Neumann Ciuffo on Wikimedia under Creative Commons License.
Sight description based on wikipedia