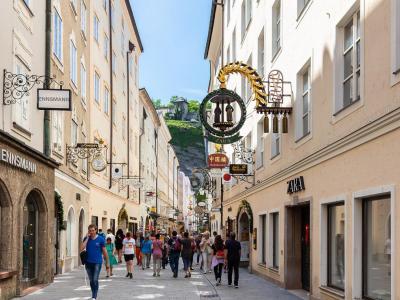 Getreidegasse is the most important shopping street in Salzburg, as well as being the city's oldest. Most of the high-end boutiques and tourist shops are located here.

The street existed from the time of the Romans when the city was called Juvavum. It was the main road that connected Salzburg to Bavaria. The narrow street has tall medieval baroque houses belonging to the rich merchants of the city. It was in one of these houses that Mozart was born. The family of Salome Alt, the mistress of Archbishop Wolf Dietrich von Raitenau also lived here. It was called Trabegasse until the 19th century.

Today, the street is lined with shops with wrought iron signboards. There are many store-lined sidestreets that lead to other parts of Salzburg. The upper floors of the buildings are still used as homes or lodgings by merchants and students. Shops in the Getreidegasse sell branded products like Louis Vuitton luggage and Polo shirts. There are smaller stores selling Mozart mementos and Sound of Music memorabilia. Quaint cafes and restaurants are found here. Mozart’s birthplace is the most visited building in the street and the other notable structure is the old City Hall which was once the residence of the Keutzl family.

Why You Should Visit:
Incredibly picturesque little street, with good shops, no cars, and a lot of people watching to do.

Tip:
If planning some shopping for gifts, take a look in a couple of stores because they often carry similar products for different prices.
Small alleys lead off the main street – do wander down these as lots of smaller shops and nice cafés can be found.
Image by Philip Pötsch, Philipweb on Wikimedia under Creative Commons License.