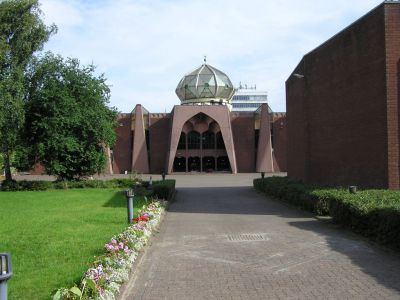 The Glasgow Central Mosque stands on the South Bank of the River Clyde, and while it is not open to non-Muslims except on special “open days”, you shouldn’t pass up a chance to see this elegant place of worship.

The mosque was built in 1983 on four acres of beautifully tended gardens. The building is a typical Arab-style with the main entrance of engraved glass in a floral design. The dome above the central prayer hall is also of glass and lets in natural light. The Mihrab points towards the Mecca. The tall Minaret is situated in the main courtyard.

The mosque has several “open days” every year when it hosts exhibitions of Muslim art, including 14th and 15th century manuscripts of the Koran, Arabic wood and metalwork, musical instruments and coin collections.

During these open days, non-Muslims are invited to visit the exhibitions, to take part in lectures about the Koran and the Muslim way of life and talk with members about their religion and beliefs. This is to promote an understanding about the differences between religions.

Do visit the mosque if you are lucky to be in Glasgow during the open days, the exhibitions are very interesting. But out of respect for the religion, following a dress-code is advised – no shorts or short skirts and skimpy tops.
Image by Finlay McWalter on Wikimedia under Creative Commons License.

Glasgow is famous for its vibrant nightlife, with lots of top nightspots located close to one another. This gives any visitor a wide choice of places to go, from simple pubs to trendy and chic clubs. Don't miss the chance to visit some of the most popular clubs in Glasgow with our Top Nightspots tour.

Glasgow is a fantastic city to visit with your family, because there's a whole range of great attractions for everybody - young and old - to enjoy. Take our Family Fun Tour to catch the must-see family attractions in the city.