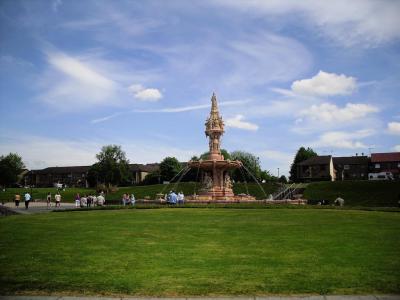 In 1450 William Turnbull, Bishop of Glasgow, donated a strip of land alongside the river Clyde to the people of Glasgow. Originally the land was used for washing and bleaching laundry, grazing sheep, and drying fishing nets. The land at the time was a marshy flood plain and it served as the city's only green space.

The Green covers 136 acres. It was a swampy area divided into several separate "greens." There was the High Green, the Low Green, the Carlton Green, and the Gallowgate Green. There were no major improvements to the parkland until 1817.

In the wake of the Napoleonic Wars there was a depression and the Town Council hired 324 workers to remodel Glasgow Green. The park was leveled out and drained and the land was used more extensively by the public. Throughout the 19th century to this day the park was often the scene of political and revolutionary activities.

In recent days the park has been a popular spot for live music events. The park has hosted events by Michael Jackson, the Stone Roses, the Download Festival Scotland, featuring Metallica, Linkin Park, Korn, and Slipknot.

The most distinctive part of the park itself is the Heritage Trail. The trail takes one and a half hours to complete, moving at a casual pace. The trail starts at the Peoples Palace, a museum built in the French renaissance style.