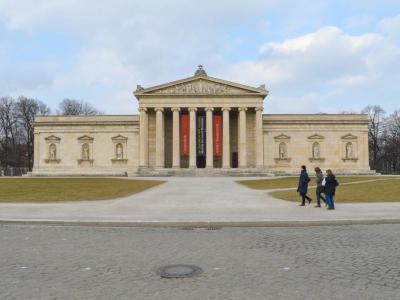 The Glyptotheck is a Greek and Roman Sculpture Museum located at Konigsplatz in Munich. It houses sculptures collected by the Bavarian King Ludwig I.

The Glyptotheck was constructed between 1816 and 1830 in neoclassical style to resemble a Greek Temple. The architect, Leo von Klenze, designed the building. Originally, all the walls of the structure were made of marble. The classical style building has an Ionic portico and the exterior walls have niches where 18 original Greek and Roman sculptures were installed. Originally, the interior walls were covered with frescoes by artists, Wilhelm von Kaulbach and Clemens von Zimmermann. The frescoes did not survive the damage caused by the World War II bombardment of the city. Many of the interior marble walls were also destroyed.

Between 1806 and 1830, King Ludwig I acquired one of the finest collections of Greek and Roman sculptures through his agents. Well known pieces at the Glyptotheck are the Munich Kouros and the temple figures of Aegina from the archaic period, the portrait of Homer and the Medusa Rondanini from the classical period, the Barberini Faun, which is regarded as the most famous sculpture from the Hellenistic period, and Roman busts including those of Emperor Augustus, Nero, Septimius Severus and his wife, Julia Domna. Visitors can take a conducted tour around the exhibits on Thursday evenings. The museum stays open all week except on Mondays.
Image Courtesy of Flickr and Francisco Anzola.
Sight description based on Wikipedia.