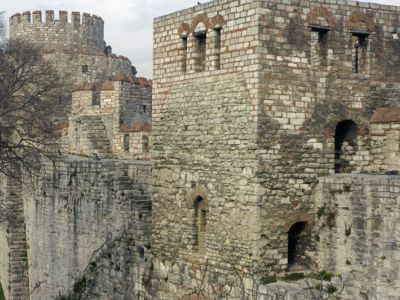 A number of gates provided access to Constantinople, among which the Golden Gate on the 7th Hill – also called the Gate of Saturninus, the Xerolophos Gate, and İsakapı ("Gate of Jesus") – was the most important one. Many emperors and commanders made a triumphant entry through it, including Emperor Heraclius in 628, known for recovering the True Cross and riding into the city on a chariot drawn by four elephants. As such, the gate could not be of normal size, nor of ordinary decoration; it had to be monumental and gold-covered, with numerous statues and reliefs increasing its splendor.

The gate survived until the Ottoman Era and was partly destroyed by an earthquake only in 1509. Today, remains of the fort are still visible, and the gate's entrance can be seen from the Yedikule Cemetery.
Image Courtesy of Wikimedia and Dick Osseman.