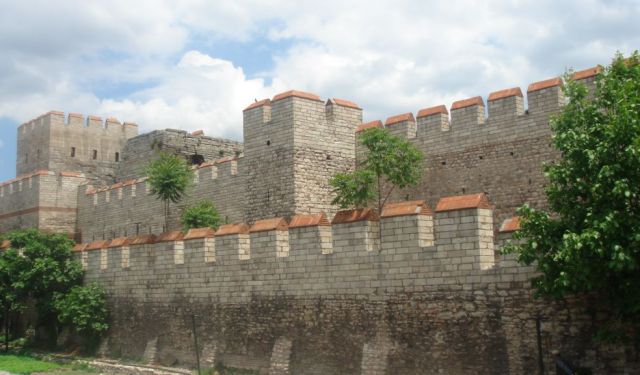 Image by Bigdaddy1204 on Wikimedia under Creative Commons License.

One of the most elaborate fortification systems of ancient times, the Walls of Constantinople were built by Constantine the Great to protect the city against attacks by both land and sea, ever since he established it as the capital of the Eastern Roman Empire. From these older Constantinian Walls only the old Golden Gate did still exist in the late Byzantine Era when, in the reign of Emperor Theodosios II, a new series of Land Walls were built. Apart from Constantinople's remarkable geographical location, these incredible fortifications were what saved the Byzantines time after time as foreign armies crashed, in vain, against them.

The Theodosian Walls are now in various stages of preservation – some are almost intact, some are crumbling, and some are undergoing restoration – but all provide a vital link to the past of this great city. Free to wander around, they are best explored during daylight hours.
How it works: Download the app "GPSmyCity: Walks in 1K+ Cities" from iTunes App Store or Google Play to your mobile phone or tablet. The app turns your mobile device into a personal tour guide and its built-in GPS navigation functions guide you from one tour stop to next. The app works offline, so no data plan is needed when traveling abroad.

A number of gates provided access to Constantinople, among which the Golden Gate on the 7th Hill – also called the Gate of Saturninus, the Xerolophos Gate, and İsakapı ("Gate of Jesus") – was the most important one. Many emperors and commanders made a triumphant entry through it, including Emperor Heraclius in 628, known for recovering the True Cross and riding into the city on a chariot drawn by four elephants. As such, the gate could not be of normal size, nor of ordinary decoration; it had to be monumental and gold-covered, with numerous statues and reliefs increasing its splendor.

The gate survived until the Ottoman Era and was partly destroyed by an earthquake only in 1509. Today, remains of the fort are still visible, and the gate's entrance can be seen from the Yedikule Cemetery.

Image by Dick Osseman on Wikimedia under Creative Commons License.
2

The Xylokerkos Gate lies between towers 22 and 23. Its name derives from the fact that it led to a wooden circus (amphitheater) outside the walls. The gate complex is approximately 12 m wide and almost 20 m high.

According to a story related by Niketas Choniates, in 1189 the gate was walled off by Emperor Isaac II Angelos because, according to a prophecy, it was this gate that Western Emperor Frederick Barbarossa would enter the city through. It was re-opened in 1346, earning the name of Belgrade Gate, as many prisoners brought from Belgrade had settled in the area after the conquest of Serbia by Ottoman Sultan Suleiman I. It then closed again before the siege of 1453 and remained closed until 1886, leading to its early Ottoman name, Kapalı Kapı ("Closed Gate").

Tip:
Climb the stairs on the right and left sides of the gate to get a different panorama of Istanbul via the defense towers.


Image by CrniBombarder!!! on Wikimedia under Creative Commons License.
3

The Gate of the Spring or Pēgē Gate was named after a popular monastery outside the Walls, the Zōodochos Pēgē ("Life-giving Spring") in the modern suburb of Balıklı. It lies between the heptagonal towers 35 and 36, which were extensively rebuilt in later Byzantine times: its southern tower bears an inscription dated to 1439 commemorating repairs carried out under John VIII Palaiologos. In addition, in 1998 a subterranean basement with 4th/5th-century reliefs and tombs was discovered underneath the gate.

It was through this gate that, on 25 July 1261, the forces of the Empire of Nicaea, under General Alexios Strategopoulos, unexpectedly entered and retook the city, which had been the seat of the Latin Empire since its capture by the Fourth Crusade in 1204. Having learned from some independent local farmers that the entire Latin garrison, as well as the Venetian fleet, were absent conducting a raid against the Nicaean island of Daphnousia, Strategopoulos and his men attacked the walls from the inside, surprised the guards and opened the gate, giving the Nicaean force entry into the city. The Latins were taken completely unaware, and after a short struggle, the Nicaeans gained control of the land walls. Thanks to the timely arrival of the returning Venetian fleet, many of the Latins managed to evacuate to the Latin-held parts of Greece, but the city was lost for good. The recapture of Constantinople signaled the restoration of the Byzantine Empire, and on 15 August, Emperor Michael VIII entered the city in triumph and was crowned at the Hagia Sophia.
Image by CrniBombarder!!! on Wikimedia under Creative Commons License.
4

The best-preserved and one of the most intriguing gates of the Theodosian Walls, substantially retaining its original, 5th-century appearance, is the Gate of Rhesios named according to the 10th-century Suda lexicon after an ancient general of Greek Byzantium. In early modern texts it also referred to as the Gate of Rhegion (allegedly after the suburb of Rhegion, today's Küçükçekmece), or as the Gate of Rhousios, after the hippodrome faction of the Reds which was supposed to have taken part in its repair.

The gate stands out for the exceptionally large number of inscriptions preserved on its tower (at least six have been recorded), of which the most frequently cited is: "The Fortune of Constantine, Our God-Protected Despot, Triumphs..."
Image by todd.vision on Flickr under Creative Commons License.
5

Originally named after a nearby church, this gate nowadays bears the name Topkapi or the "Cannon Gate", after the great Ottoman cannon, the 18-ton "Basilic", that was placed opposite it during the 1453 siege of Constantinople. With a gatehouse of 26.5 m, it is the second-largest gate after the Golden Gate.
Image by Lambiam on Wikimedia under Creative Commons License.
6

The Fifth Military Gate lies immediately to the north of the Lycus stream, between towers 77 and 78, and is named after the quarter of the Pempton ("the Fifth") around the Lycus. Heavily damaged, with extensive late Byzantine or Ottoman repairs evident, it is also called Hücum Kapısı ("Assault Gate") in Turkish, because here the decisive Turkish breakthrough was achieved on the morning of 29 May 1453.

Some earlier scholars identify this gate as the one mentioned in the texts on the final siege and fall of Constantinople. If this theory is correct, the last Byzantine emperor, Constantine XI, died in the vicinity of this gate during the final Ottoman assault. Support to this theory comes from the fact that the particular gate is located at a far weaker section of the walls than the "Cannon Gate", and the most desperate fighting naturally took place here.

Although the gate itself is absent, visitors can actually stand in the place where the Theodosian Wall was firstly breached in over a millennium.
Image by Carole Raddato on Flickr under Creative Commons License.
7

Second only to the Golden Gate in importance, the Gate of Charisius (or the Adrianople Gate) located at the highest of the city's seven hills is the place where the defense of the city was mounted by the last Byzantine Emperor, and where the first Sultan of the Ottoman Empire, Mehmed the Conqueror, made his triumphal entrance into Constantinople.

The conquest bestowed immense glory and prestige on the country. There is some historical evidence that 10 years after the conquest of Constantinople, Mehmed II visited the site of Troy and boasted that he had avenged the Trojans by conquering the Greeks (Byzantines).
Image by Carole Raddato on Flickr under Creative Commons License.