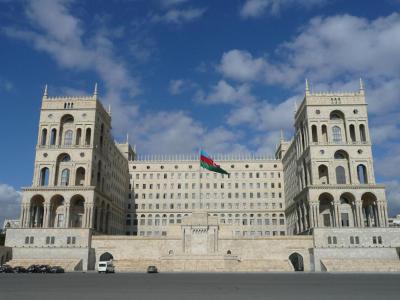 The Government House of Baku, also known as House of Government, is a government building housing various state ministries of Azerbaijan. It is located on Neftchiler Avenue and faces the Baku Boulevard. The rear side of the building faces busy Uzeyir Hajibeyov Street of central Baku. Government House was designed for 5,500 people.

In 1934, the Soviet authorities announced a tender for construction of Baku Soviet Palace (later renamed to Government House). The competition was won by well known architects Lev Rudnev, V.O. Munts and K. Tkachenko. With some alterations to the project, the building of the Government House was built in 1936 — 1952.

The building housed many organizations and business firms after restoration of Azerbaijani independence in 1991. In 2006, the government of Azerbaijan started renovation works of the building and completed the project in 2010.
Image Courtesy of Flickr and Dan Nevill.
Sight description based on Wikipedia.