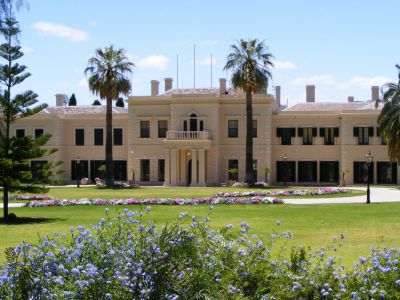 Government House is the official residence of the Governor of South Australia. The earliest part of the House to be built was the east wing of the present building which was completed and occupied in May 1840. When completed, Government House consisted of the present main Drawing Room, Morning Room, Small Dining Room, and upstairs there were three bedrooms, a dressing room and two small servants' rooms. Government House is probably the second oldest continuously occupied house in the State and is located in magnificent well kept grounds which are periodically used for important public ceremonies.
Image by Peripitus on Wikimedia under Creative Commons License.
Sight description based on wikipedia