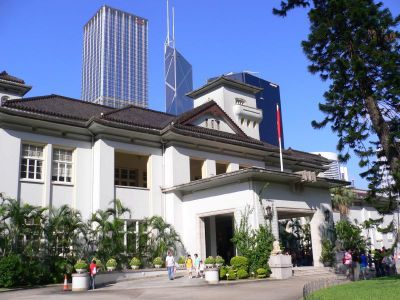 The Government House is located on the Government Hill in the Central district of Hong Kong. This house is the official residence of the Chief Executive of Hong Kong. The structure was built in 1855 as a Colonial Renaissance style home, but during the Japanese occupation, it was significantly remodeled. Today the building has a hybrid Japanese-Neoclassical structure with a tower and roof elements, added by Japanese architect Seichi Fujimura in 1944.

The House was designed by Charles St George Cleverly and its construction started eight years after Hong Kong was declared a British colony in 1851. The first Governor to reside in the Government House was Sir John Bowring. In 1891, a Ballroom was added to the original house for social functions. Even during the Japanese occupation, during World War II, the Government House was occupied by the official Japanese Military Governor.

Today, the Government House is home for the Chief Executive of Hong Kong. The current structure has been extensively renovated, and an elaborately expensive fish pond has also been added.
Image by WiNG on Wikimedia under Creative Commons License.