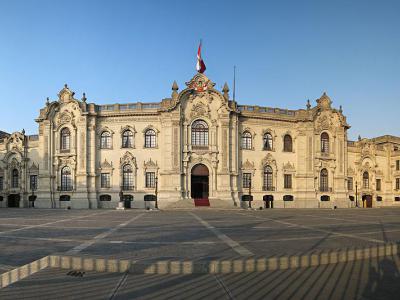 Also known as the House of Pizarro, the Government Palace – the official residence of the President of Peru – is located on the bank of the Rimac river in the center of Lima, overlooking the northern side of Plaza de Armas. This imposing site is graced with history and presented both strategic and spiritual importance to the ancient Incas as a former burial ground that had once housed the shrine of Taulichusco, the last chief of the Incas.

Construction of the palace was ordered by Francisco Pizarro in 1535. Since then it has endured multiple renovations with the last one occurring in the 1930s, resulting from which is the current French Baroque look of the building. The project was undertaken by architects, Ricardo Malachowski of Poland and Jean Claude Sahut of France, and was overseen by Peruvian dictators.

Although access to the palace is restricted, those who wish may call the protocol office and arrange special tours of the premises. Visitors can observe the change of guard ceremony which is held every day at noon; no tickets are required. Inside the palace, of special interest are the Jorge Basadre Room, the Golden Hall, and the Sevillan Room.

Tip:
Starting at 11:30am, a band plays prior to the changing of the guard at noon.
If you're there around 6pm, you can view the retiring of the flag and a little razzle-dazzle by the guards.
During the day, you can get a horse and carriage to take you around, but both the Palace and the Plaza are also very pretty at night.
Image by fortes on Wikimedia under Creative Commons License.