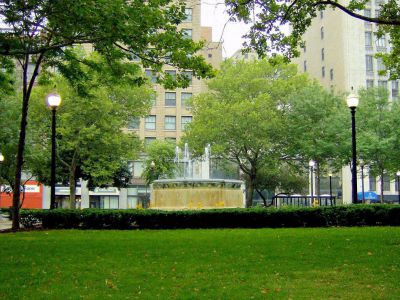 The Grand Circus Park Historic District contains the 5-acre (2.0 ha) Grand Circus Park in Downtown Detroit, Michigan that connects the theatre district with its financial district. Among the notable buildings encircling the park are the David Broderick Tower and David Whitney Building on the south, Kales Building, and Central United Methodist Church on the north, and Comerica Park and Detroit Opera House on the East. The Detroit Opera House overlooks the eastern edge of the park and the grounds include statuary and large fountains. Along the east necklace there are other venues including the Music Hall Center for the Performing Arts, the Gem Theatre, Century Club, The historic Harmonie Club and Harmonie Centre. The district was listed on the National Register of Historic Places in 1983.
Image by Mikerussell on Wikimedia under Creative Commons License.
Sight description based on wikipedia