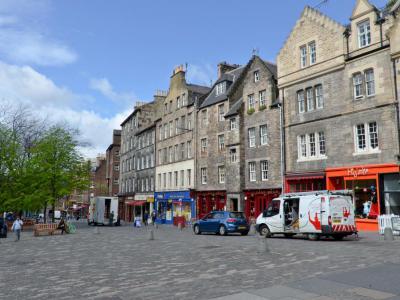 One of the best places for shopping or relaxing over a pint or a meal in Edinburgh is undoubtedly the Grassmarket.

It is a historic market nestled in a small valley so that it is lower than the surrounding street levels. Between 1477 and 1911 it was the most important horse and cattle market in the city, and because it drew large crowds, it was also the place where public executions were held.

According to legend a woman was hanged here and lived to talk about it afterwards! Maggie Dickson was a fishwife accused of murdering her child and she was sentenced to be hanged for her crime. In those days “until you are dead” didn’t figure in the sentence proceedings.

Maggie was duly hanged and then cut down and her body taken away for burial, but on the road to the cemetery, she woke up. She couldn’t be re-tried and was considered to have paid her debt to society and so she went free. There is a pub in the market that bears her name.

The market was a poor area until the 1980s when it began to become popular with students – perhaps because of its numerous pubs and clubs. The area was renovated with many of the pubs setting up outside terraces and installing dining rooms. A lot of shops moved into the market and it is a great place to find good clothes and souvenirs at bargain prices.

“The Shadow of the Gibbet”, dark paving stones laid out in the form of a gibbet are a sombre reminder of the death penalty; you can see them next to the Covenanter’s Monument. The Bow Well on one side of the market dates back to 1681.

Why You Should Visit:
Quirky, safe and interesting; great for those who need a regular change of scenery, as there is a variety of shops and pubs for every wallet and taste of music.

Tip:
Check out Carnivàle Vintage for a wonderful selection of fun vintage clothes, Tasty Buns for a pastry and a coffee, Hula Juice Bar for a healthy meal, and Mary's Milk Bar for pure indulgence.
Up the road from Grassmarket goes Victoria Str. which is also well worth a visit, together with Royal Mile (further up) which has lots of cool independent shops and restaurants/cafés.
Image by Jorge Franganillo on Flickr under Creative Commons License.