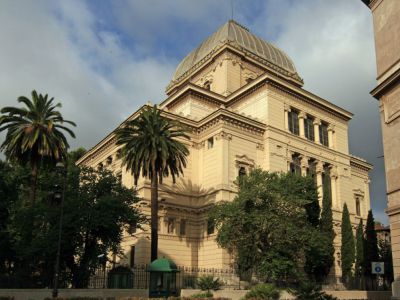 The Great Synagogue of Rome is the largest synagogue in the city. It houses the offices of the Chief Rabbi and also the Jewish Museum. It is a beautiful building and well worth a visit. Life for the Jewish community in Rome, as in so many other countries, was often terribly difficult. Jews started to settle in Rome in the 2nd century BC and established trading centres in the city. Between 63AD and 135AD many Jews were brought to Rome as slaves in the aftermath of the Roman/Judean War.

Made to live in the Roman ghetto for centuries, the Jews were allowed one rather small synagogue. In 1870, after the unification of Italy, the ghetto was demolished and the Jews were granted citizenship. They began to plan the site for their new synagogue and finally settled on Lungotevere Cenci, not far from the River Tiber. The synagogue was constructed between 1901 and 1904 following designs by Vincenzo Costa and Osvaldo Armanni, who chose an Art Deco eclectic style to make it stand out from surrounding buildings. Its aluminum dome is square and a well-known landmark. The interior of the synagogue is delicate and very beautiful, with graceful columns, stained glass windows, with the bimah and six menorahs under the open dome.

In the museum you will see fragments of marble from the old synagogue in the ghetto, silver ritual items, jugs, bowls, 15th to 19th century textiles, photos and historical art from the ghetto. There are plaques commemorating the local Jews killed by the Nazis and by the PLO bombing in 1982. Photos are not allowed to be taken inside the synagogue and you will be asked to open any bag you bring with you.
Image by Jensens on Wikimedia under Creative Commons License.
Sight description based on wikipedia