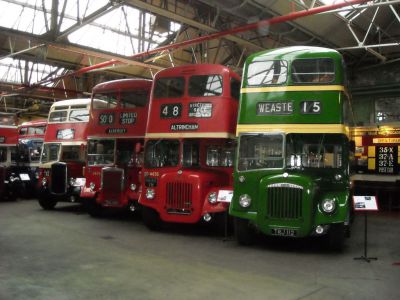 Greater Manchester, the area encompassing Manchester and its suburbs, has a rich history of providing effective public transport to its population. As a rapidly growing conurbation comprised of Manchester and its many satellite towns, the area has had to overcome a number of transport problems in the 20th century. The city’s public transport is comprised of rail services, an extensive bus network, and the Metrolink tram system, which runs on road and rail.

The latter two services are extensively covered by the museum, which houses an impressive collection of restored omnibuses from across the region. The museum also has a range of trams and trolley buses from the turn of the 20th century on display, as part of a walking tour of Mancunian transport, taking in everything from Victorian horse drawn buses to the modern Metrolink tram vehicles.

The museum, which is fully wheelchair accessible, is located adjacent to Queens Road Bus Depot, on Cheetham Hill Road, about a mile north of Manchester city centre. Woodlands Road Metrolink stop is a short walk away. Admission is £4.00 for adults, with concessions available. Children under 16 can visit for free.