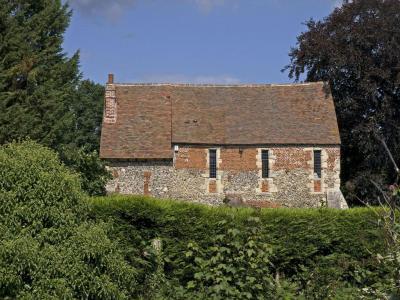 The Franciscans began arriving in England in 1224, during the lifetime of their founder, Saint Francis of Assisi. Greyfriars was the first friary in England. The name stems from the plain grey cloth and belt ropes that made the friar's habits.

Their original accommodations were poor, and they quickly realized they needed better housing and land to farm. So in 1267, the building was rebuilt from stone.

King Henry VIII's establishment of the Church of England was not good news for the friars. Several brothers were imprisoned, and two were executed for refusing the Act of Supremacy. The friary was disbanded, and the lands and property were surrendered to the Crown.

The land wound up as private property for centuries and was known as the Greyfriars Estate. The precise original site of the friary is unknown. The owners began restoring the one surviving building in 1919. That building had been used as a prison at one point and a guesthouse at another. Today, it is the Greyfriars Chapel, and you can still see the names of inmates carved into the wood walls.

The gardens surrounding the Chapel contain a few other visible elements of the 13th-century buildings, including remnants of the church and part of a stone bridge.

Today the Chapel and Gardens are owned by the Eastbridge Hospital. The gardens and buildings are a quiet and beautiful place to visit and a welcome break from the bustling city.
Image Courtesy of Wikimedia and Ymblanter.