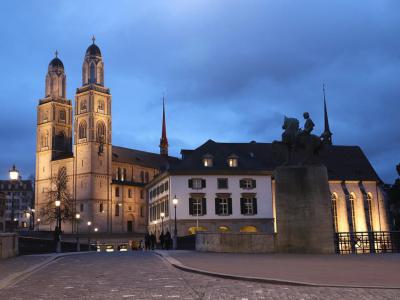 The Grossmunster Church is a Romanesque-style Protestant church in Zurich and has a very interest history. It is one of the four major churches in the city (the others being the Fraumunster, Predigerkirche and St. Peterskirche). According to legend, the church was originally commissioned by Roman emperor Charles the Great. Construction of the present structure commenced around 1100 and it was inaugurated around 1220.

The Grossmunster Church was the birthplace of the Swiss-German reformation. In 1520, Swiss reformation leader Huldrych Zwingli initiated the Swiss-German Reformation in Switzerland from his pastoral office at the Grossmunster. Zwingli won a series of debates presided over by the magistrate in 1523 which ultimately led local civil authorities to sanction the severance of the church from the papacy.

The reforms initiated by Zwingli and continued by his successor, Heinrich Bullinger, account for the plain interior of the church. The iconoclastic reformers removed the organ and religious statuary in 1524.

These changes, accompanied by abandonment of Lent, replacement of the Mass, disavowal of celibacy, eating meat on fast days, replacement of the lectionary with a seven-year New Testament cycle, a ban on church music, and other significant reforms make this church one of the most important sites in the history of the reformation.

A statue of the emperor Carolus Magnus, or Charles the Great, can be found at the southern tower of Grossmunster Church. Carolus Magnus was the Holy Roman Emperor between 771 and 814. He united majority of western Europe Central Europe. His achievements gave a new meaning to his name. In many European languages, the very word for "king" derives from his name. The statue shows Carolus holding his sword and it looks as though his crown is falling off his head.

Why You Should Visit:
Fairly plain inside, but the sliced agate windows are some of the more interesting and colorful anywhere.
The old statue of Carolus Magnus is definitely worth seeing, and you can't miss the beautiful door as you go in.

Tip:
A trip to the top of the tower is worth it if you can do 180+ steps straight up. The views are wonderful and you can stay as long as you wish.

Zürich has a great number of museums, many of them historical museums displaying the history of Zürich and its citizens and the history of world civilizations. Many exhibit unique objects, documents and artifacts witnessing the past. One of the most interesting is the museum of timepieces from ancient times till the present. Take a look at Zürich's most popular historical museums on this...  view more