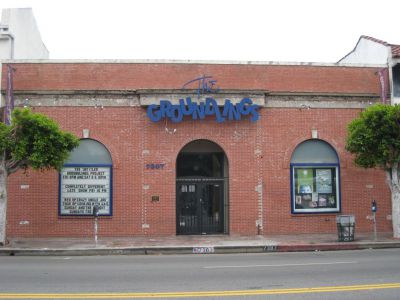 Do you want to take in a light-hearted show while you are in Los Angeles? If so, then book your seats now at the Groundlings – you won’t be disappointed! The shows are all well-acted and very funny. Book early because the theatre is so popular the tickets sell like hot cakes!

The Groundlings is a theatre company and school founded in 1972 by Gary Austin. Housed in a theatre on Melrose Place, the troupe produces improvised scenes and sketches. The school is open to over 2000 students a year with a teaching programme on four levels: Basic, Intermediate, Writing and Advanced. A lot of the former students have gone on to success in television shows, soap-operas and films.

The name – the Groundlings – comes from the lower-class audience of Shakespeare’s plays, who couldn’t afford to pay for seats, so they sat on the ground in front of the stage. The theatre opened in 1979 in a building that had once been a decorator’s studio and then a massage parlour.

Before the theatre opened the troupe put on performances in theatres all over the town. The troupe started out as fifty original members, performing artists who set up a workshop with Gary Austin. They wrote sketches and improvised skits based on what they had read in magazines and newspapers. After a year or so, they began putting on performances for friends to see; word got out about the hilarious shows and highly talented actors, and the rest, as they like to say here in L.A., is history!
Image by Gary Minnaert (Minnaert)) on Wikimedia under Creative Commons License.

Los Angeles features a great number of beautiful churches and temples. These religious buildings attract a lot of tourists as well as Hollywood celebrities. For instance, Bing Crosby often visited the Good Shepherd Church in Beverly Hills. Take this self-guided tour to explore some of the wonderful Los Angeles churches.

The nightlife in Los Angeles is extremely varied to suit everyone's taste. This is particularly true in relation to the clubs, restaurants and bars that host live music performances. Take the following walking tour if you'd like to see live R&B, rock, jazz or blues concerts.

The Los Angeles shopping scene offers a great variety of big shopping malls, amazing indoor and outdoor stores, as well as beautiful specialty shops. You can find a wide range of outstanding gifts, unique souvenirs and creative pieces of art in these stores. Take the following self-guided tour to explore the gorgeous specialty shops in Los Angeles.

Being one of the most culturally diverse cities in the US, Los Angeles contains a great number of museums that reflect the history of this city and the world. Its museums feature outstanding permanent collections, as well as rotating displays that specialize in television, radio and movie archives. Check out the famous museums in Los Angeles on the following self-guided tour.

Los Angeles is loaded with a great number of outstanding theaters. These theaters showcase outstanding performances and productions that you will not want to miss. Many of the theaters are now national historic landmarks. Take this self-guided tour to explore the amazing theaters in Los Angeles.