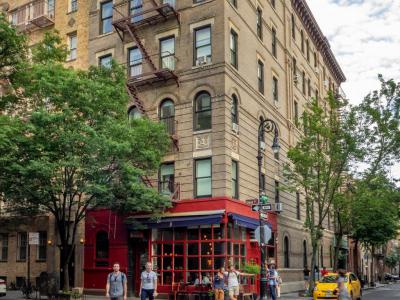 Albeit very short, covering a span of only five blocks, Grove Street retains a rustic, old-world, greener feel, complemented by some of the most quintessential bistros, restaurants and cafés in Greenwich Village.

At No. 59, MARIE'S CRISIS (partly named after Thomas Paine's masterful essay, "The American Crisis") has been around forever and is definitely a good place for both locals and tourists, who will be made most welcome. Characterful, totally NYC, and inexpensive, this piano bar offers a wonderful chance to belt out show tunes – old and new – with the resident pianist. The crowd itself mostly consists of Broadway artists who want to chill off doing what they know to do best: sing!

Also brimming with character is the 1822 wooden frame house – one of the most complete such in the city – at 17 Grove Street, as well as the highly exclusive Grove Court, a gated alleyway hidden between No. 10 and 12 (you'll have to peer through the gate!) with a cluster of strongly attractive brick townhouses from the 1850s.

Grove St intersects Bedford St, one of the oldest Greenwich Village byways. Right on the corner (above the Little Owl) you will always see a flock of people taking pictures of the building that served as the exterior for Monica's apartment in "Friends", though the TV sitcom was shot entirely in L.A.'s Warner Bros studios.

Nearby at 102 Bedford St is the original 'Twin Peaks', designed in 1830 as an artists' residence, with two peaks in its gabled roof, while at No. 86 is the unheralded entrance to CHUMLEY'S (Mon-Sat: 5:30–11:45pm) – one of NY's classic Prohibition-era bars (definitely take a peek inside!).
Image Courtesy of Wikimedia and Ajay Suresh.