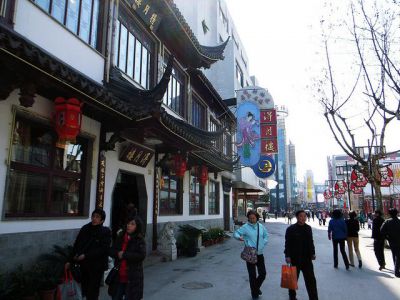 Guanqian Street is located in Suzhou city center, an area covering 0.52 square kilometers, the commercial part of the city.

The location of this 150-year-old street lying in front of the Xuanmiao Taoist temple explains its name, which means "before a temple". The street running 760 meters long, consists of the eastern, middle and western sections. The eastern part is filled with nice ancient buildings of historical significance. The middle is mainly the temple and fashionable shops occupy the western part.

There are hundreds of shops, restaurants, bars, stores and clubs in old fashioned structures surrounded by colorful signs and neon lights along the street.

An old laneway leads to the gate of the temple while the Guanqian pedestrian street lies just ahead of it.
Image Courtesy of Flickr and livepine.
Sight description based on Wikipedia.