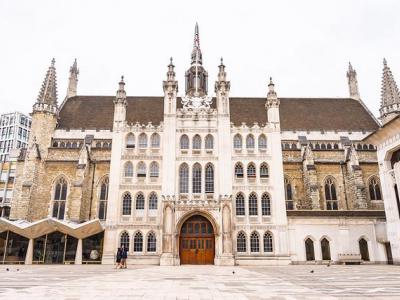 Dig anywhere in London and find layers of Roman, Saxon and Medieval remains. Under the entrance to the Guildhall yard in Moorgate are the remains of the London Roman Amphitheater. Over the amphitheater are the ruins of a 13th century gatehouse.

Legend says the site of the Guildhall was once the location of the palace of Brutus of Troy. Geoffrey of Monmouth, in his 1136 History of British Kings, claims Brutus established a city on the Thames called New Troy. Could New Troy be London?

The current Guildhall is the administrative and ceremonial center of the City of London Corporation. Construction of the Hall began in 1411. It was completed in 1440. In 1788 George Dance, architect, added a "Hindustanee Gothic" facade to the main entrance of the south front.

The Guildhall has several grandiose capacious rooms. Under it all are the East and West Crypts. They date from 1042. The Guildhall Art Gallery was added to the Guildhall complex in the 1990s. The Guildhall Library, also a new addition, is a public reference library with collections dating from the 11th century.