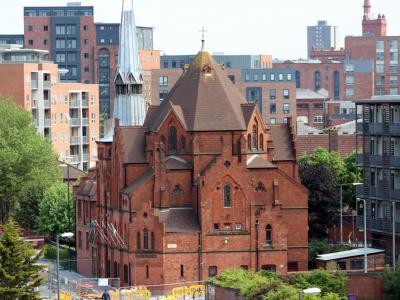 Gustaf Adolfs Kyrka is a Scandinavian church, located close to Albert Dock in the south of the city centre. The church was built in 1883 to serve Liverpool’s growing Scandinavian community, which by that time had surpassed 50,000 immigrants. The city was a halfway house for Scandinavians travelling to the Americas, and many chose to settle in Merseyside rather than head to the uncharted New World. Liverpool and the surrounding region continues to house a large Scandinavian population, and Gustaf Adolfs Kyrka remains a focal point for the city’s Nordic community.

The church is owned and managed by the Liverpool International Nordic Community, and provides religious services, community events and language courses for citizens and descendants of Scandinavia – Norway, Sweden and Denmark – and their fellow Nordic nations, Finland and Iceland. Gustaf Adolfs Kyrka, named after a 17th century King of Sweden, is one of only four octagonal church buildings remaining in the UK. This unusual building was designed by William Caroe, and combines Gothic Revival architecture with uniquely Scandinavian features, including stepped gables and a concave lead spire. The church holds regular services each Sunday morning at 11am, coffee mornings on weekdays at the same time and Scandinavian language courses on weekday evenings.
Image by Rodhullandemu on Wikimedia under Creative Commons License.