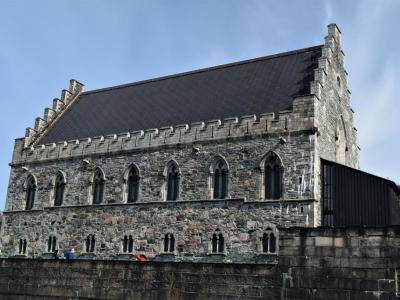 Haakon's Hall is a medieval stone hall located inside the fortress. The hall was constructed in the middle of the 13th century, during the reign of King Håkon Håkonsson (1217-1263). In medieval times, it was the largest building of the royal palace in Bergen, the then capital of Norway. It was built as a replacement for older wooden structures on the site. It is the largest secular medieval building in Norway. The hall is built in Gothic style.

In addition to the great hall itself, there were two more levels, a cellar and a middle floor. The hall's similarity to English structures of the same time, and the fact that monumental stone building was relatively uncommon in Norway at the time, has led to an assumption that the hall was designed by English architects, possibly the court architect of King Henry III of England, with whom King Håkon was on friendly terms.
Image by Anne and David on Flickr under Creative Commons License.
Sight description based on wikipedia