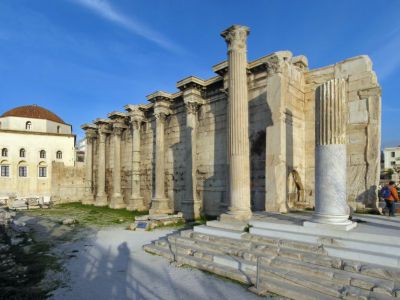 There is not a whole lot left of this Roman-era library, but it must have been a wonder in its 2nd century A.D. heyday. Emperor Hadrian, a great admirer of Greek culture (he was known as "Graecula" or "Little Greek"), equipped the expansive complex with lecture halls, gardens and art galleries. His rule was a time of peace and prosperity, when arts and culture flourished. Therefore, the library is an example of the cultural institutions established during his reign.

During Hadrian’s reign, the library was a storehouse of valuable rolls of papyrus and other artwork. The building had many chambers used as reading rooms and some were lecture halls. It was damaged during the invasion of Herules and was restored again by the Roman leader of Athens, Herculius. Later, three Byzantine churches were built within its ruins: a Byzantine 5th-century church, a 7th-century church and a 12th century cathedral form part of the ruins.

The best-preserved part of the library is an outer wall with Corinthian columns. There isn't a whole lot to see inside, but admission is included with the Acropolis ticket, so certainly worth a walk-through.
Image by Andreas Trepte on Wikimedia under Creative Commons License.