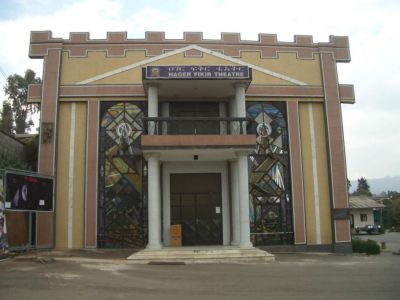 Hager Fikir Theater in Addis Ababa is a must visit place, for it is not only the theater with the greatest tradition in Ethiopia but also the oldest indigenous theater in Africa. The theater was founded in 1935 and it replaced a former night club. Later the entrance of the theater was rebuilt so as to resemble a real theater. Standing for more than 70 years of cultural life in Addis Ababa, the theater is a playhouse where modern Ethiopian music and drama were born and nurtured. Many stars like Aster Aweke, Tilahun Gessesse and Frew Hailu began their careers on the stage of Hager Fikir Theater. Both traditional Ethiopian plays and translations of European playwrights by William Shakespeare, Friedrich Schiller, Henrik Ibsen and Molière have been produced at Hager Fikir Theater in recent decades. Movie performances are on schedule most of the days. Theater plays are performed on weekend and musical shows are on stage on public holidays.
Image Courtesy of Wikimedia and Steffen Wurzel.
Sight description based on Wikipedia.

Want to visit this sight? Check out these Self-Guided Walking Tours in Addis Ababa. Alternatively, you can download the mobile app "GPSmyCity: Walks in 1K+ Cities" from iTunes App Store or Google Play. The app turns your mobile device to a personal tour guide and it works offline, so no data plan is needed when traveling abroad.