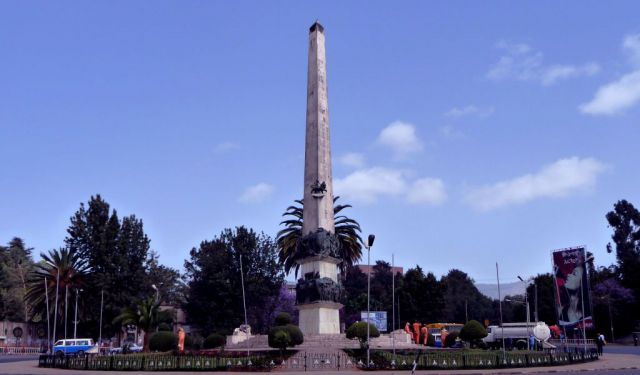 Some remarkable landmarks of Addis Ababa can be found in the north part of the city. There are monuments, beautiful buildings and the zoo where you can see lions walking. This self-guided tour will lead you through these attractions in the north of Addis Ababa.
Image Courtesy of Wikimedia and Ondřej Žváček.
How it works: Download the app "GPSmyCity: Walks in 1K+ Cities" from iTunes App Store or Google Play to your mobile phone or tablet. The app turns your mobile device into a personal tour guide and its built-in GPS navigation functions guide you from one tour stop to next. The app works offline, so no data plan is needed when traveling abroad.

Addis Ababa University was founded in 1950 at the request of Haile Selassie by a Canadian Jesuit, Dr Lucien Matte, S.J. as a two-year college, and began operations the next year. Over the following two years an affiliation with the University of London was developed. The university maintains branches in many cities throughout Ethiopia, leading to the claim of being "the largest university in Africa." The university offered its first master's programs in 1979 and its first PhD programs in 1987. The writer and theorist Richard Cummings served as a member of the Faculty of Law of the Addis Ababa University.
Image Courtesy of Flickr and d_proffer.
Sight description based on Wikipedia.
2

Karl Marx Sculpture is the monument in honour of this person in Addis Ababa that symbolizes the friendship between these two countries. It is a huge sculpture that represents the head of Karl Marx. It stands at the entrance to the campus of the University of Addis Ababa. The statue was created by a German sculptor from GDR - Jo Jastram. He later made many other sculptures for Ethiopia. Until today, this statue has remained as a reminder of Ethiopian and German relations.
Image Courtesy of Wikimedia and John Mayall.
3

The Yekatit 12 Square is a monument in Addis Ababa commemorating victims of Italian reprisals following an attempt to kill the Italian Viceroy Rodolfo Graziani 19 February 1937, or Yekatit 12 in the Ethiopian calendar. Every year, people of Addis Ababa celebrate this day. The monument represents a white obelisk where the scenes of massacre and the funerals of the victims are depicted. This monument is also called the Monument of Martyrs or Sidist Kilo ("Six Kilometer"), that is, the name of the quarter where the monument is located.
Image Courtesy of Wikimedia and Altiplano.
Sight description based on Wikipedia.
4

Lion Zoo Park was founded in 1948 and is a small zoo in Addis Ababa. Before the park was opened, some lions were hunted in Ethiopia and donated to the Emperor Haile Selassie. The lions lived at the Palace. Later they decided to keep the animals in Lion Park. The few lions that you will see there are rare species: Leopantels Abyssinica. There are also other Ethiopian animals at the zoo such as tortoises, monkeys, baboons, ducks, rabbits and fish.
Image Courtesy of Wikimedia and Jean-François Paumier.
5

5) National Museum of Ethiopia (must see)

The museum houses the nation's artistic treasures as well as many of the most precious archaeological finds such as the fossilized remains of early hominids. Currently, the National Museum of Ethiopia has four main exhibition sections. The basement is dedicated to archaeological and paleoanthropological sections and exhibits hominids. The first floor contains objects from ancient and medieval periods, as well as regalia and memorabilia from former rulers, who include Emperor Haile Selassie. The second floor show art work in a chronological order, from traditional to contemporary works while the thrid floor comprises a rich ethnographic displays.

Image Courtesy of Wikimedia and Richardal.
Sight description based on Wikipedia.
6

There is an Armenian church in Addis Ababa, as there are very many ethnic groups living in this city. Armenians contributed very much to the development of Addis Ababa and this church is a monumental building in the cultural history of Addis Ababa. St. George Armenian Church is the Orthodox church. It was built from gray stone and is an impressive building.
Image Courtesy of Flickr and hasby.
7

The Greek Orthodox Church was constructed in 1935. It stands in a prestigious part of the city as Greeks were very influential in Addis Ababa. The church represents the traditional Greek Orthodox style. Today very few Greeks remain in the city, as they left Ethiopia in the time of the Derg regime. The church remained as a memorial to the once powerful Greek community.
Image Courtesy of Flickr and Reiner Barczinski - Äthiopien Ethiopia Etiopia.
8

Hager Fikir Theater in Addis Ababa is a must visit place, for it is not only the theater with the greatest tradition in Ethiopia but also the oldest indigenous theater in Africa. The theater was founded in 1935 and it replaced a former night club. Later the entrance of the theater was rebuilt so as to resemble a real theater. Standing for more than 70 years of cultural life in Addis Ababa, the theater is a playhouse where modern Ethiopian music and drama were born and nurtured. Many stars like Aster Aweke, Tilahun Gessesse and Frew Hailu began their careers on the stage of Hager Fikir Theater. Both traditional Ethiopian plays and translations of European playwrights by William Shakespeare, Friedrich Schiller, Henrik Ibsen and Molière have been produced at Hager Fikir Theater in recent decades. Movie performances are on schedule most of the days. Theater plays are performed on weekend and musical shows are on stage on public holidays.
Image Courtesy of Wikimedia and Steffen Wurzel.
Sight description based on Wikipedia.
9

Piazza is an important shopping area in Addis Ababa. There are many small shops and street stalls there. It is a favourite place for shopping among women as there are many jewelery shops. There are also clothes, especially for women, shoes, bags and all types of African goods.
Image Courtesy of Wikimedia and Khalid Mahmood.
10

Ethnological Museum is housed in what used to be Haile Selassie's palace, in the area of the main building of Addis Ababa University. This exciting museum displays the precious and varied ethnic collections of Ethiopia. The museum gives deep insight into the diverse cultures of Ethiopia through the ethnographic objects of about 80 ethnic groups. There is even a bedroom of one of their great emperors. There are also collections of sacred arts.
Image Courtesy of Flickr and Agnieszka staskowiak.