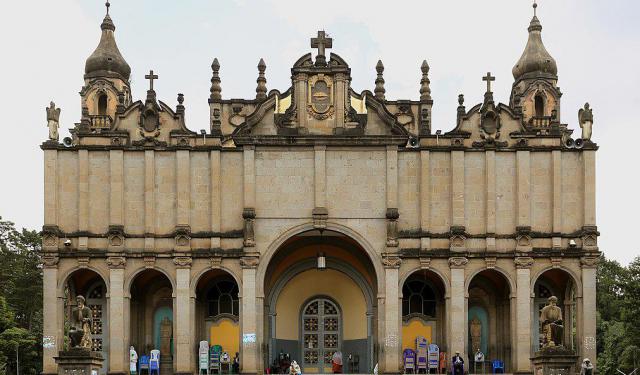 Ethiopia is mainly a Christian country. However, there are many other religions of the world there as the country has many ethnic groups. Addis Ababa boasts very beautiful and old, Christian cathedrals and churches. There are also Catholic churches and mosques in the city. This self-guided tour will lead you to the great religious sights of Addis Ababa.
Image Courtesy of Wikimedia and Sailko.
How it works: Download the app "GPSmyCity: Walks in 1K+ Cities" from iTunes App Store or Google Play to your mobile phone or tablet. The app turns your mobile device into a personal tour guide and its built-in GPS navigation functions guide you from one tour stop to next. The app works offline, so no data plan is needed when traveling abroad.

Nur Mosque is a Muslim temple in Addis Ababa. This mosque is the oldest Islamic temple of the city. It was recently rebuilt. The mosque was built to reflect all the greatness of Islamic architecture with characterized domes, towers and piers.
Image Courtesy of Wikimedia and Outwards.
2

The Cathedral has a museum where it displays an Imperial throne and weaponry used in the wars against the Italians including curved swords and tridents and giant helmets made from the manes of lions.

Image Courtesy of Wikimedia and Ondřej Žváček.
Sight description based on Wikipedia.
3

St. Mary Church is dedicated to the mother of God. The entrance to the church area is endowed with a domed gate. The church has a bell tower, painted dome and glass windows. There are two bronze statues of angels at each part of the staircase that leads to the church.
Image Courtesy of Flickr and Ollie Crafoord.
4

Holy Trinity Cathedral is the highest ranking Orthodox cathedral built to commemorate Ethiopia's liberation from Italian occupation and is the second most important place of worship in Ethiopia.

The church compound is the burial place for those who fought against the Italian Occupation, or those who accompanied the Emperor into exile from 1936 to 1941. The Cathedral complex also includes the 'Bale Wold' Church, which is also known as the Church of the Four Heavenly Creatures. This church served as the original Holy Trinity Monastery Church before the building of the Cathedral and dates back to the reign of Emperor Menelik II. Other facilities include a primary and a secondary school, a monastery, the Holy Trinity Theological College, a museum and monuments housing the remains of those massacred in Addis Ababa by the Italians in 1937.

Image Courtesy of Wikimedia and VBzi.
Sight description based on Wikipedia.
5

Ba'etta Mariam Orthodox Church is an impressive church that stands on the grounds of Menelik Palace. Menelic Mousaleum is also here. Ba'etta Mariam is the main and biggest church here, but there is also a smaller Orthodox church in front of it. This church is round in form. In these churches you will find beautiful religious art and orthodox icons.
Image Courtesy of Flickr and filippo_jean.
6

Gebi Gebriel is the Ethiopian Orthodox Church situated close to the mausoleum of Mehelec. The church is Orthodox but built in the Ethiopian tradition. It is round in shape and very small. The church is quite bright in colour. There is a decorated cross at the dome of the church and at its entrance.
Image Courtesy of Flickr and matt wengerd.
7

St. Stephen's Church, or as it is called in Ethiopia - St. Estifanos Church, is a new church built in the part of Addis Ababa where there are many modern buildings. The entrance of the church is a large, three-domed gate. There is beautiful, religious art inside the church and at its entrance.
Image Courtesy of Flickr and Brayo.
8

San Salvador is the Roman Catholic Church in Addis Ababa. It is a large round church built from red brick. There is a tall tower, so characteristic of Catholic style. The Catholic Church appeared in Ethiopia many centuries ago. It is very similar to the Ethiopian Orthodox Church in its expressions of faith.
Image Courtesy of Wikimedia and Koryakov Yuri.