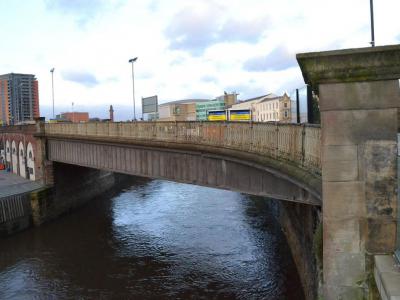 Manchester’s Hanging Bridge is one of the city’s oldest surviving structures. The first known reference to the bridge is in a manuscript dating back to 1343. This bridge was replaced a century later by the present structure, which can still be seen today. The bridge gained its name from its location over the Hanging Ditch, a trench which linked the Rivers Irk & Irwell, close to where Manchester Castle once stood, in the northern quarter of the city centre. Historians have speculated that material from the castle may have been used in the construction of the bridge. The River Dene is believed to have passed along the trench. This mystical river, now disappeared, lends its name to Deansgate, one of Manchester’s most popular streets.

The Hanging Ditch and its namesake bridge may have existed since Roman occupation of the city, when it was known as Mamucium. This is believed to be the origin of the term Mancunian, which is often applied to the city and its residents. The bridge fell out of use in the medieval era before being excavated in the Victorian era. A double arched bridge constructed from sandstone, the bridge has been preserved as a museum piece, and can be seen within the Visitor Centre at Manchester Cathedral, close to where the Hanging Bridge was first constructed.
Image by Shinjan b on Wikimedia under Creative Commons License.