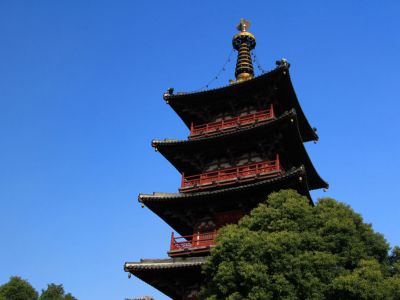 Hanshan Temple, literally "Cold Mountain Temple", is a Buddhist temple and monastery. It is located at the town of Fengqiao, about five kilometers west of the old city of Suzhou. Traditionally, Hanshan Temple is believed to have been founded during the Tianjian era (502-519) of the reign of Emperor Wu of Liang, in the Southern and Northern Dynasties period. The current name of the monastery derives from Hanshan, the legendary monk and poet. Hanshan and his disciple Shide are said to have come to the monastery during the reign of Emperor Taizong of Tang (627-649), where Hanshan became the abbot.
Image by PS Liu on Flickr under Creative Commons License.
Sight description based on wikipedia

The southern region of Suzhou is home to a number of historic attractions and prominent city landmarks. Here you will find the famous Grand Chanel, Pan Gate, Ruiguang Pagoda, Wu Gate Bridge, Great Wave Pavilion, Confucian Temple and Master of the Nets Garden.