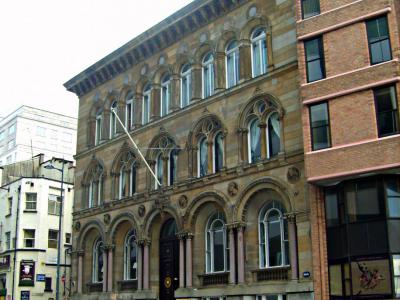 The Hargreaves Building, located in Chapel Street, close to Liverpool’s docklands, was built in 1859 as a head office for Brown Shipley Bank. The bank was founded by local finance magnate and philanthropist Sir William Brown. Designed by architect and renowned local figure Sir James Picton, the building was a collaboration between two of the city’s most famous sons. Designed in the Venetian style with rounded window frames, Hargreaves Building also bears symbols of the city’s rich maritime heritage. Images relating to history’s great explorers – Columbus, Vespucci and Pizarro, amongst others – are engraved above the windows. The building is actually four stories in total, as it has a large basement level below ground.

When the Brown Shipley Bank moved to London in 1888, the building was converted to house offices. It was then taken over by the city’s Racquet Club, who turned it into a brand new premises, comprising squash courts, a swimming pool and a billiard room. This followed a grim chapter in Liverpudlian history, when the club’s previous building was destroyed during the Toxteth Riots of 1981. The Hargreaves Building is now a hotel and restaurant, still bearing the Racquet Club name. The building was awarded Grade II listed status by English Heritage in 1966.
Image Courtesy of Wikimedia and John Bradley.